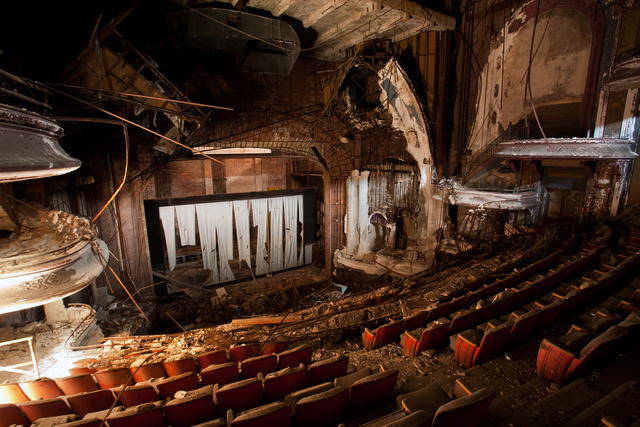 Opened on Thanksgiving Day - November 25, 1915, Proctor’s Palace Theatre in downtown Newark was one of the rare “double decker” theatres. Designed by architect John W. Merrow, the eight-story complex had a large 2,800-seat theatre at ground level with seating on orchestra & 2 balcony levels and a smaller ‘roof garden’ theatre of about 1,400 seats occupying the top four floors beneath the roof. That gives a total of 4,200 seats in the two auditoriums. The 10-story high facade of the fairly narrow building contained only the 40-foot high lobby of the larger theatre, which had its auditorium behind it, and offices above. A series of murals in the lobbies were by painter William de Leftwich Dodge. There were 35 fire escapes to allow egress from the building.

Very little has been reported about the operation of the upstairs ‘roof garden’ theatre (an early newspaper reviewer stated that “Mr Proctor prefers to keep quiet about the policy of it”. It was apparently seldom used until the summer of 1961, when it was renovated for the presentation of foreign films as the Penthouse Cinema, opening with Ingmar Bergman’s “Secrets of Women” (Though a Glass Darkly).

But the main theatre, with its cavernous two balconies, was always one of Newark’s leaders, first with vaudeville only and eventually, by 1926, taken over by movies exclusively. A Wurlitzer 2 manual, 10 rank organ had been installed. The projection booth was at the rear of the second balcony. When all of F.F. Proctor’s theatres were acquired by Radio Keith Orpheum, it became known as RKO Proctor’s Theatre. By 1931 the seating capacity had been reduced to 2,309. The theatre eventually fell victim to the urban decline of Newark and to RKO’s merger with Stanley-Warner, which operated the nearby and larger Branford Theatre. The new management decided to close Proctor’s Theatre in 1968, and it has been standing more or less derelict ever since.

Hopefully, someone will come to its rescue before it turns into a ruin similar to the ex-RKO Bushwick Theatre in Brooklyn.

Thanks so much Ed! I’m humbled by your high praise. I hope I continue to live up to your kind words in all my future projects.

I just added a two part article on the photo page about the opening of this grand theater.

On Tuesday 20 February 1951, Bela “Dracula” Lugosi presented his in person Horror and Magic Stage show at RKO Proctor’s Palace. Currently I am conducting research on all things Lugosi; if anyone out there actually saw this show and/or has memorabilia (poster, handbill, photos) related to this show, please contact Bill at Thanks in advance for any assistance!

It’s a shame that the late Whitney Houston who grew up in the Newark area and eventually was laid to rest there didn’t help save this theatre during her lifetime and illustrious career.

To Matt Lambros
How were you ale to gain access to the theatre? I once went to the Adams and asked if I could check it out but I was told ‘no’. I assume it’s due to insurance reasons.

Does anyone know if this particular theater had a Theater organ installation?

I found this video of the theater’s interior.

Had RKO SW kept the theater open, it would’ve been into the hands of Cineplex Odeon, then Loews Cineplex, and finally AMC.