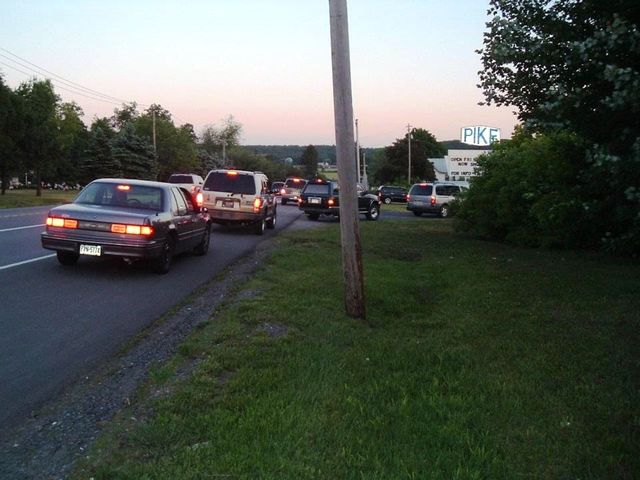 The Pike Drive-In was built in 1952 and opened in April 1953. It’s location is near Williamsport, PA. It orginally had one screen it now has three. The speakers are gone to make way for AM/FM sound broadcast over the radio.

We acquired the Pike Drive-in early in 2006 and are winding down our first season. The third screen is now open. We hope to re-open the flea market next year and have more cool events, plus keep fixing the place up. We just had a “dusk ‘til dawn” show on Sept. 3rd. Here’s our web site: http://pikedrivein.com

I sold my interest in the Pike to my partner in 2007, & acquired the Harvest Moon aka: Port drive-in, in Linden, Pa.
http://moondrivein.com

Wow, Bob, I drove up 15 to Williamsport just 2 weeks ago while working in that area of PA. Wished I had known sooner!

COULD THIS DRIVE IN ONCE BEEN CALLED THE 309 Drive In? It was owned by MEL FOX AND PARKED 350 CARS.

It’s been the Pike since it opened in 1953. The 1st movie was Son Of Paleface, starring Bob Hope.

From a history Page: The Pike Drive In Theatre opened in 1953 during the “golden age” of the drive in. Built as a single screen theatre, it was expanded to a 3 screen in the 1990’s. It is the last open ozoner in the county. Current ownership purchased the business in 2006, and over the past 8 years, they have made numerous improvements to this drive in theatre. Although the owner lives over a hundred and fifty miles away from the drive in, it is a labor of love, and he is on site every weekend to make sure that the patrons of the Pike enjoy a great night of movies under the stars. There is a drive underway to convert to digital projection.

The Williamsport Sun-Gazette reported on Oct. 30, 1952, “Three city men have started construction of a modern, 800-car theater on the Montgomery Pike. They are Harry J. Miele, Harry L. Nixon and Benjamin Pulizzi. Mr. Miele said the theater being built at an estimated cost of $135,000, will open about April 1. Clearing work on the land, about 12 acres, started last week.” It opened on April 16, 1953, showing Son of Paleface.

Strange that he wasn’t listed in the 1952 newspaper article, but Billboard magazine reported on April 18, 1953, “Charles Collins and his partners are about ready to open the Pike Drive-In near Montgomery, Pa.” A month later, Billboard wrote that the “600-car Pike” was in operation.

The 1955-56 Theatre Catalog listed the owner of the Pike as Charles Collins. In its first listings in the Motion Picture Almanac series, the Pike’s owner in 1955-57 was C. Collins. The owner in 1961 was John Shade.

That was probably Joe Farruggio, who owned the nearby Point Drive-In.

Joe McDade is the current owner of the Pike. His LinkedIn page indicates he bought it in March 2006.