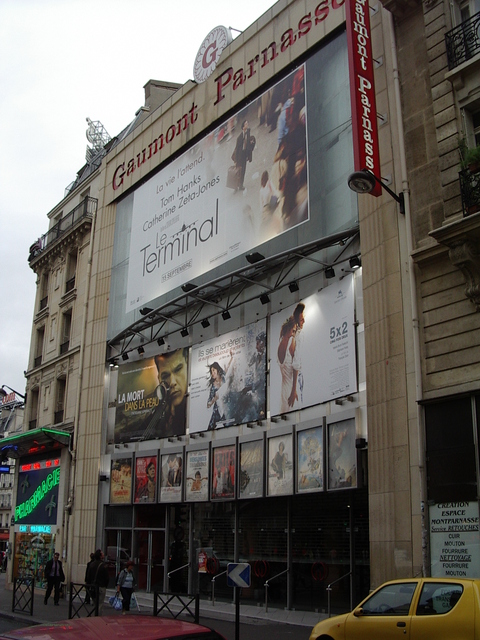 Located in the south of the city centre. The theatre was built at the beginning of the 20th century and became a 900-seat movie theatre called Palais du Montparnesse on 25th April 1913. It was designed by architectural firm Orlhac & Duron. In 1919 a balcony was added which increased the seating capacity. A Neo-Classical style design remained even after the silent movie period ended and a renovation in the 1930’s kept the stage with orchestra pit. Only the facade was modernised with a big neon sign.

The roof could open during summer evenings, and that was even more impressive than an ‘Atmospheric’ style theatre. Once new seats were installed with red velvet material, when it was a stormy weather and started to rain, it took some time to close the roof, and by the end of the movie the red colour had come off on the patrons’s clothes.

In the 1960’s a wide screen covered the area of the orchestra pit and stereo sound was added but the auditorium still had its turn of the 20th century appearance.

Around the 1970’s when the Montparnasse skyscraper was built, it became a first run theatre after a refurbishing and the neighbourhood had changed. The district of Montparnasse was becoming very attractive for moviegoers and the Pathe chain, after the success of multiplexing other theatres, decided to add on to the Montparnasse taking over a former shop next door and gutting the inside of the theatre to make way for five more screens and plenty of room to queue up. On the roof, a penthouse with a garden was occupied by the manager of Pathe chain. Every projection booth was run from a control room automatically. A second entrance was opened on the Boulevard Montparnasse.

After a short time yet another new screen was added with the space of former lounges on the ground floor. A periscope equipment was needed because the projection booth was on the ground floor level. This 610 seat auditorium could screen 70mm prints in stereo sound.

In the late-1990’s, the Pathe Montparnasse was old-fashioned compared to newer multiplexes, but the location was one of the best of the city for a movie theatre.

A daring project was decided to merge the two nearby movie theatres. The old buildings were razed and after one year a new 12 screen multiplex with huge lobbies and bars and space enough for patrons to wait for the next performance was erected.

Four auditoriums have very large screens. All auditoriums have digital sound. There are three bars and and box offices on each side of the building, and a Hagen-Daz shop. With these features, the new Gaumont Parnasse is attractive enough that it has the second place of the number of tickets sold each year (the number one is UGC Cine Cite Les Halles). By 2011, another three screens had been added.

In 2004, eight movie theatres with a total of 40 screens are located in the Montparnasse district and the Gaumont Parnasse is currently one of the most important multiplexes in France. By 2018 it had been re-named Gaumont Parnasse - Cote Parnasse.

Exterior photos (both facades) from November 2008.