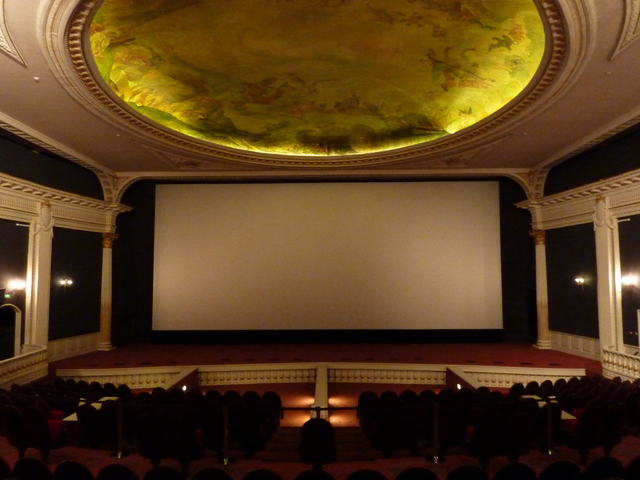 The Theatre Francais was built in 1800 and had 1,700 seats. The architecture of the building, which stands in the middle of a block is like the historic buildings of this city of the southwest of France. On the 2nd December 1855, it was destroyed by a fire, leaving only the four walls standing. It was rebuilt to the plans of architect Albert Gozier. Disaster struck again on 5th February 1920 when the building was ravaged by another fire, which again left only the four walls standing. It was rebuilt once again.

The American Paramount chain was opening movie palaces in Europe around the 1920’s and 1930’s, and chose very fine theatres such as the Theatre de Vaudeville in Paris, which became the Paramount Opera. The Theatre Francais was taken over by the American Paramount Pictures Inc. on the 8th June 1923 and re-named Paramount Francais, becoming a movie theatre. During World War II, the Paramount Francais was taken over by the German occupiers and it became a soldatenkino (soldiers cinema)

It was later operated by French owners showing first run movies. The theatre had a very beautiful auditorium with two balconies and chandeliers with a huge stage used for premieres and live shows.

In the 1980’s the movie theatres of Bordeaux were multiplexed or closed and to survive every free space of the Francais was used to create six more screens with 800 seats after being sold to the CGR chain.

In 2000 a new multiplex opened in Bordeaux in a former railway station and a UGC Cine Cite in the city center which caused the Gaumont to close and the Francais with its small auditoriums began to lose its prestige and it closed in 2005. Five years later it re-opened as a 12-screen multiplex with seating for 1,848. The main screen located in what was the second balcony level retains the 1920’s decoration and painted fresco on the ceiling.

The only way to keep patrons in 2004 is a cheap ticket policy (5 Euros around 5 dollars) in order to distinguish with the other multiplex.