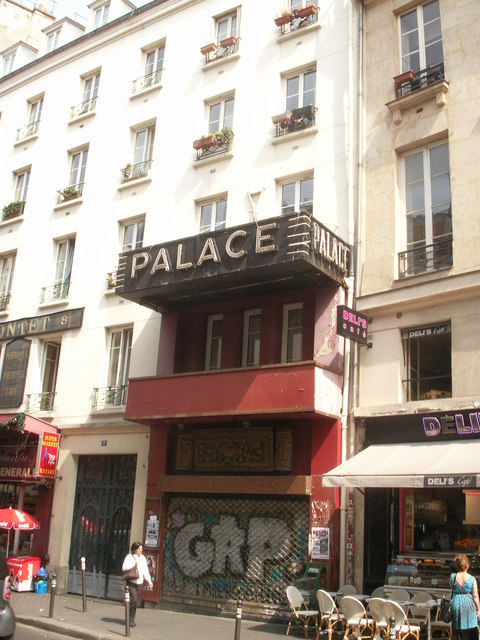 The Cinema Music Hall Empire opened in 1923 as a vaudeville theatre and most of the famous singers of these days performed there. Jean Gabin started there as a boy and later as a singer before acting in movies.

For a while it was renamed Alcazar d'Hiver (winter) but it was converted to movies in 1946 as Cinema le Palace, because the owner was a French showman, who also owned the Casino de Paris didn’t want to challenge with the nearby Folies-Bergere.

The auditorium was designed in Art Deco style. The stalls were stadium seating with many boxes on each side going from the balcony level to the stalls level and an orchestra pit and stage complete with a pipe organ.

The Palace was a first run theatre and after many years, the building was only a little altered. In 1968, the owner died and after closing the theatre nearly became parking space. During the summer of 1968, all the costumes remaining from the music hall period were sold in the vast lobby at cheap prices. The Palace remained dark until it was landmarked and returned to live theatre.

The celebrity of the Palace did not end during the movie period, but after being purchased by a famous nightclub owner, who renovated it in 1978 and returned it to the original splendor, it became a famous disco, the equivalent of Studio 54 in New York.

In 1983, with new management, the Palace started to decline and has been dark for a long time. The auditorium was crumbling away, awaiting a new destiny, which had come by 2009, when it had been restored and was in use as a live theatre.