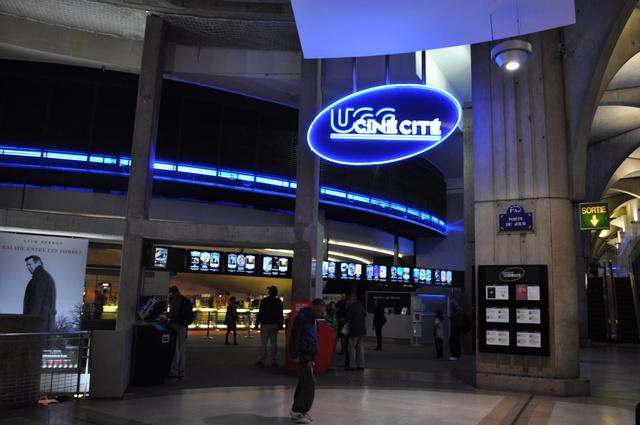 When the second part of the Forum des Halles mall in the center of Paris opened in 1986, the new multiplex called the Forum Horizon, operated by an independent chain, created a new concept with a big bar and 560 seat stadium seating in the largest of the four auditoriums. It also had 70mm equipment and the first THX sound system in France. The other auditoriums had large screens and the design was sophisticated, especially in the main auditorium. It quickly challenged the other movie theatres in the other part of the mall because of the better quality.

The UGC chain took control of the Forum Horizon in 1992. Because of the theatre’s success and with the opportunity to take over the Espace Cousteau next door after it closed, UGC could realise what was never done or imagined before: a huge multiplex in the center of Paris close to the most important underground railway station and subway station drawing people from everywhere.

The Espace Cousteau had already a big auditorium and it would be easy to add others, but a major refurbishing was needed to create bars and more lobby space.

The new UGC Cine Cite les Halles (the first ever Cine Cite built) opened in 1995 with fifteen screens, digital sound, and stadium seating everywhere.The growing success and the closing of a rock and roll museum in the mall in 1997 allowed UGC to increase the capacity with four more screens, bars, and a restaurant.

It is now the most popular first run multiplex of Paris.

The best movies in the world in their original language and comfortable seating. Even the staff is nice!!! I have been to this cinema more than any in my life and in the world. Great place to see a great movie.

A photograph of the entrance:
View link

A great great multiplex that remains civil even when it’s packed…Saw a lot of bunch of pictures here over the past couple of years including Spiderman 2, Bug, In the Valley of Elah, Control, Death Proof, The Good Shepherd, Paris Je T'Aime, The Lives of Others

English translation of an article on the Silverscreens French site, from 1998.