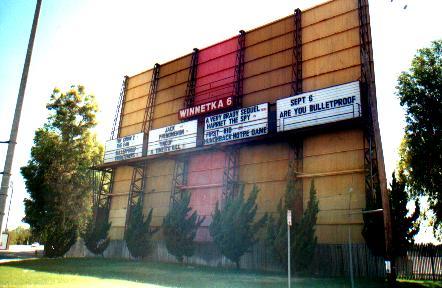 The Pacific Winnetka 21 multiplex has occupied the site of the former drive-in since 1998.

I have alot of memories going there when I was a teenager,We used to load up our cars n trucks and party at the movies,I remember buying cigarettes for dana plato,rest her soul, But we spent alot of times there,My best friend loved the giant spider invasion movie,and it seems we saw it evey week it played.

One memory I have: being 6 years old, sitting in the backseat of my friend’s Camaro, waiting for the movie to start, and listening to Van Halen’s first record. I think I also saw the flick “Grizzly” at this drive-in.

My wife and I saw the very last movie they ever played. I forget the main feature, ironically, but the second run movie was ‘The Rock.’ The other screens had gone dark, but right about midnight, the second run movie began. I fell asleep for a lot of the movie, LOL. My car’s radio did not work, so I had to borrow one of the theater’s loaner speaker thing they loaned out, and I was thinking, “why are they even taking my driver’s license to borrow it, it’s not like the theater will be open tomorrow (meaning I should have been allowed to keep is as a souvenir, LOL. Sad it was closing, but I have to say, to this day, I am so glad it didn’t end up turning into nonsense, like condos or homes, but rather, stayed as a theater! The closing night was so subdued, it really just seemed to be another random weekday night! Bittersweet!!