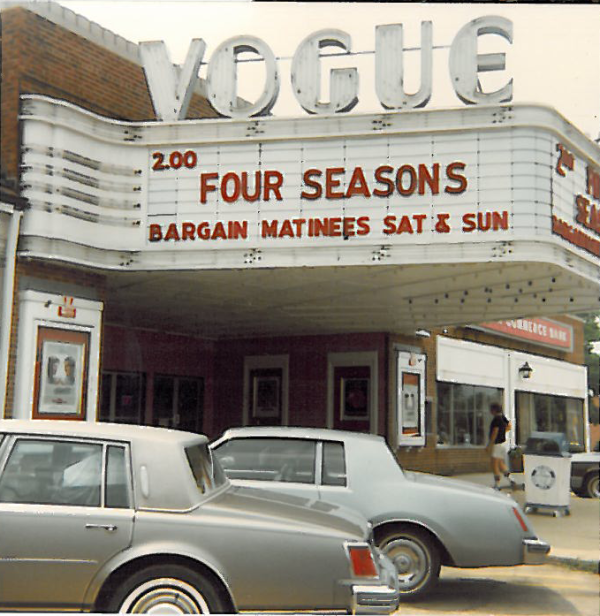 The Vogue Theatre opened in May 1947, and was first operated by Warner Brothers Circuit Management Corporation. Designed by the architectural firm White & Boenisch, with Weinberg, Laurie & Teare as associate architects. The single story entrance facade was in a Neo-Colonial style of red brick with white trim. A feature of the foyer was a 14 x 7 feet photomural of Warner’s Burbank Studio’s, which was set in a wall panel. Seating in the Art Moderne style auditorium was all on a single level.

Later operated as an independent, the theatre closed in 1986, and has since been subdivided into retail stores.

I worked for Sylvia Sheer from ‘79-'82. She was quite a person, as well as a manager. I will never forget how she talked me into saving $10 from every check (she held it) To help me learn to save money. She would get mad if I didn’t walk across the tracks when I bought coffee, just to save a nickle! She was very cold sometimes on the outside but always a sweetheart on the inside. I miss her. How is she and Irv? I hate to ask.

The Vogue was so cool! I saw first run of BLOW UP there in a packed house. lAlso saw ELVIRA MADIGAN and OLIVER! there among others

Apparently this was once considered as a posssible theater for showing Cinerama, as plans were drawn up though not executed.

Photos of the Vogue appeared in the Modern Theatre section of Boxoffice Magazine, November 15, 1947. The accompanying text said that the new theater had opened in May that year (the May 3 issue of Boxoffice had said that the opening was scheduled for May 22.) The Vogue was designed by the architecture firm of White & Boenish, with Warner Brothers building engineer D. Leonard Halper supervising.

To Kevin Mc – This is Sylvia and Irv’s daughter and even though this is 1 year later – thought I’d respond to your question. They are both doing well- still living in Cleveland. Thanks for your comments – and how true they are!

I worked for Sylvia at the Vogue for about ten years. The theater opened in 1947 with the film Stallion Road starring Zachary Scott, Alexis Smith and Ronald Reagan. Photos from the opening hung in the office. The screen was replaced with a larger screen in the 1950’s forcing the removal of some seats reducing capacity to 1402. We saw several sell out crowds in the 1970’s for runs of Murder On The Orient Express and Young Frankenstein. The theater was heated by a massive coal burning furnace during it’s entire existence. We fed the furnace, pulled the ashes (and klinkers), kept the bulbs going and painted the massive marquee when it needed it. We hauled film up and downstairs when the dumbwaiter wasn’t working as projectionists were not allowed by union rules. Sylvia was a tough but always fair task master. She ran the place on a shoestring budget for RKO out of New York. Our sister Houses were The Colony at Shaker Square and The Great Northern in North Olmstead. Sylva’s husband, Irv was always a gentleman and taught me many useful skills as we worked to keep the theater in repair. I remember Sylvia and Irv fondly wishing them and their family well. TS