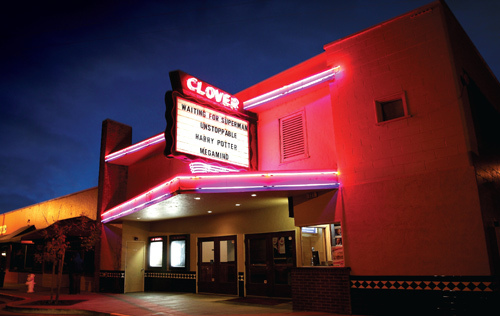 A rather unassuming theater. Think ‘budget-moderne’. It was opened as the Blair Theatre in March 1950. In January 1969 it was renamed Clover Theatre. At some point, two of the windows on the upper story were rather clumsily plastered over. On February 4, 2000 it became the four-screen Clover Cinema by building two additional screens adjacent to the building. It’s always nice to see a small town that still has a theater.

My Dad and I got to go inside this theatre in the early 1990s when it was being used as a rehearsal space for local rock bands. The man who was running it as such let us in. The lobby is plain, but had nice redwood wainscoting and door frames, which have been retained to this day. We went into the auditorium, which was very stark then, with plain smooth white walls and a contrasting painted strip down low. A very shabby twinning job had been done, cross-wise, with a new screen made simply of a painted white rectangle on drywall. There was a small stage apron in front of the original screen.
I have not been inside since the Clover’s refurbishing, but I have seen the exterior at night, and the simple neon outlining the facade and marquee make a nice small town statement. This is a classic theatre such as you can find in articles in volumnes of Theatre Catalog from the late 40s and early 50s, when new small town theatres were written about along with the larger theatres.

The Clover, was originally a single screen theatre, that was converted into a 4 screens. The Clover, for a long time, was showing Hispanic Movies. It was a single floor, with no loge or balcony. It was closed for a long time, but used by various tenants before its remodeling and grand reopening. The previous tenants showed no movies there. We went through cloverdale one night in the late evening and saw that the interior was lit. through the cracks in the door, we saw a red Nazi flag on the stage. I was in it once when i was a teenager, and it was a bare auditorium with no murals. The 4 plex is nice, we just saw Shrek there, they took the original auditorium, and made stadium seating with a nice screen and the seating is great. The other 3 screens were made by the building of an additional building to the original structure. It is doing quite well. The Clover, is an exact duplicate to the Raven Theater in Healdsburg. The Raven’s auditorium, which hasn’t been altered, looks exactly the same as the Clover before remodeling. The theater is doing happy and well, and when we were there, it was packed. Good to see for a small town (not small anymore) do well.

Just a quick update…As of July 2013, the theater has been re-opened with new owners. The theater is presently being upgraded throughout. However, the digital projectors are in and the picture/sound quality is outstanding. Prior to their upcoming “grand opening”, prices are inexpensive for FIRST run movies (8 bux for adults and 3 bux for the kiddies…can’t beat that.) Given a weee bit more time, the concession area will be top notch along with the other areas, but there are still plenty of treats to satisfy all e.g. popcorn, drinks, candy, etc. Check it out and say “hey” to the new owners, Ryan and Kathryn. We just met them…very nice and we look forward to supporting the theater in Cloverdale!!!

William Blair launched the Blair Theatre in March of 1950. It was built to replace the aging Del Rio Theatre which closed years later. In January of 1969, the theater became the Clover Theatre. On February 4, 2000, the theatre relaunched as a four-screen operation called the Clover Cinemas. The project was accomplished by building an addition adjoining the original structure.