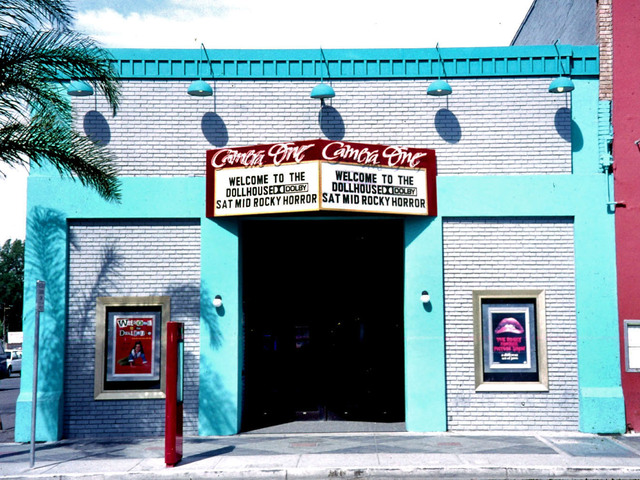 What started out as a shoe store later became the start of the Camera Cinemas chain. Shaw Theaters operated it in the 1960’s, eventually turning it into an adults only house. Pussycat Theaters took over in 1970 and operated it for a year, renaming it the Pussycat 1. (The Pussycat 2 was a block down the street–Pussycat bought that theater from Shaw as well and it was originally the Gay Theater. Pussycat left that theater in the late-1980’s after a battle with the San Jose redevelopment agency.)

Great Western Theaters of Tarzana, CA took over and ran it until 1975, showing largely kung-fu and Japanese cinema. On Sept 3, 1975, it became the first Camera Cinema, starting out as a revival house showing double bills that changed three times a week. Foreign and arthouse fare started coming here in the early-1980’s with great success.

In May 2004, Camera shut down its initial theater and it converted into an art gallery with performance space.

Hello from Colorado!
My God Father owned the Pussycat Chain. I am putting together a collection of ANYTHING Pussycat to save befor all is lost. I am really looking for an old Pussycat Marquee. You know, the oval w/ the Ms. Pussycat and “It’s a Pussycat Theatre” PLEASE, if you have any information, let me know.

Camera One has been inhabited by the excellent San Jose art gallery, GalleryAD. From their website (www.galleryad.com):

“Yes, it’s true. After five of the best years we could imagine in a former iron works foundry throwing monthly art happenings, Anno Domini will be moving into the former Camera One Theater building on South First Street. Thanks to friends, artists, audience and city agency folks that believe in A.D., we have finally signed a lease for the new location to bring the gallery smack in the middle of the heart of the city.”

I grew up here with my Dad. He managed and showed the movies when it was the Pussycat . Tom Taylor was his name. he later went on to show all those Kung fu movies thats when i was able to go with him. my punishment as a kid when mom was done with us was to go to the movies with my Dad.You dont know now that he pasted away last year how many memories this place brings back.From the old time booth with the dual projectors with the old reels of film he would have to rewind(those days are gone lol).From the scary back rooms behind the booth that scared my sister and I when we went thru them. went from a 7th grade reading level during one summer of subtitles to a 12th grade reading level hahaha. One really clear memeory was when a sign language film came in from Japan and a big plan was to bring in some hearing impaired kids to come down and enjoy a movie with sign language even one of our close friends signed up his sons school to go .Only one problem the sign language was in Japanese and no one could understand it all .100’s of deaf people talking loud during a movie wondering why they were there . My Dad was just laughning his ass off at the comical situation the best laid plans sometimes dont work out at all. I just found this sight and I lived most of my childhood at these places.Changing speakers at the Frontere Village Drive in or at the Capitol drive in .The Mereidian Quad in San Jose starnge way to be punished to have to go to the movies but 8 weeks of Herbie the Love Bug will make you listen to your mom hahahah Thanks fro helping me remeber him and what we had in my youth between the two of us Thanks

The theater often showed more than just double features in the 1970s and ‘80s. I loved triple features for more bang for the buck. For example, “the worst Science fiction movies” triple feature, which had “Plan 9 from Outer Space,” “Astro Zombies”, and “Killer Tomatoes.” When Peter Sellers died (1980), I they played a triple feature there of his films, including “Pink Panther” and I think “Dr. Strangelove”, ending with “Being There”, whose ending was particularly poignant given his recent loss. Theater was almost always full, at least when I went.