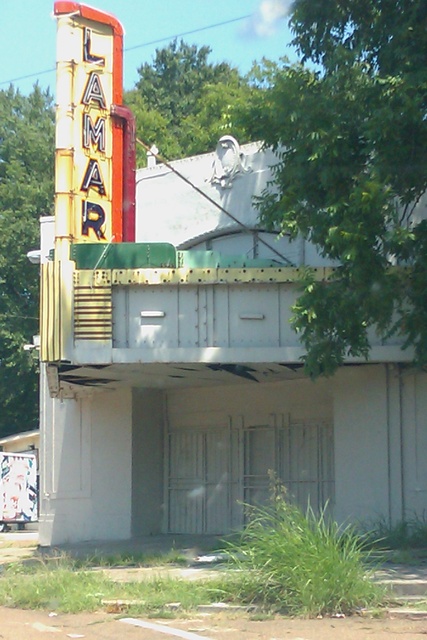 The Lamar Theatre was opened in 1926 by Joe Maceri and Paul Zerilla, who also ran the Daisy Theatre and the Rialto Theatre. In 1934 it had an expansion to provided a larger rest room and lobby area. It had an adult period during which it achieved notoriety; it was run of “Deep Throat” (1976) at the Lamar Theatre which resulted in the Memphis pornography trial (for bringing the film across the TN state line). It closed as a movie theatre and was revived once as a family entertainment venue. It has been tightly closed for several decades.

this was also one of the theatres to be bought by stax before the capitol,the lamar was put up for lease at the time and jim stewart decided on the capitol instead.

I was watching the “Deep Throat” documentary and it was mentioned in the movie, especially with mafia influence. They cut to a picture from the side of the dilapidated building and marquee.

Here is a photo from January 2006 of the Lamar looking the best it has in years. There has been some discussion about converting into a recording studio. Great to see some effort is being made to restore at least the exterior.

Here is another pre-restoration photo:
http://tinyurl.com/zef27

I thought I’d come check the new comments on the Lamar after watching “Mystery Train” again this morning, there are some very beautiful shots of the theatre in the movie. I am pleased to read that the theatre is being used/is going to be used again in a new way.

I spent many nights at the Lamar during the late 1950’s and early 1960’s. I lived up the street and was one of the neighborhood regulars. Normally, I could be found at Mr. Crawford’s poolhall or Reaves' Drugstore, both across the street from the theatre. I met my first wife at the consession, where she was employed by the Shapiro owners. Her name was Dee Dee Weaver, and she worked with Tasha and Nancy Steelman, who sold tickets. In the late evenings, after the Shapiros collected the reciepts and departed, all the local guys were allowed to come in and watch the late show without paying. Back then we had no money, and the manager —I can’t remember his name— would tell the girls to admit us for free. My buddy, Clint Combs, was sweet on Tasha, and I liked Dee Dee, so we were there most nights. I later married Dee Dee and we had three children in 34 years of marriage.

2010 Google street view: Still boarded up, but the entire exterior has been given a fresh coat of white paint and the marquee is intact.

During the late 1980’s the Lamar’s side doors (on the side away from the cross street)were so rotten that they had fallen out of the door frames, leaving the theatre open to -ahem- exploration. The building was ruined, the roof mostly gone, however, enough remained of the interior to know what it had alooked like. The seat end standards were ornate, but every other row of seats had been removed – apparently to facilitate the live portion of the adult entertainment shown in its last days. There were two organ chambers at stage level, one on each side of the small stage. No sign of the organ of course. No dressing rooms or stage facilites. There was a boiler room under the stage. The auditorium side walls had simple plaster moldings creating large rectangular panels.

Coming in from the front doors, there was a very small lobby with floor sloping up. Doors opened into the standee area with a cross aisle to exit doors at each end. There was no balcony.

The biggest surprise was up in the projection booth: it was obvious that the wall between booth and auditorium had been an exterior wall – there were bits of stone moldings and details which would never have been placed there just for the projectionist to look at. If you look at the photos of the front, you’ll see an arched top window, just above the marquee. That opens into the projection booth. The small window on the angled portion was the generator room. Directly below the booth (main floor) were two small restrooms, an office, the concession stand (later addition) and of course, the tiny “lobby.” That front 10-15 feet seems to have been added to and existing building. What was it previously? Don’t know. Theatre? Storefront? Couldn’t say.

I remember all the older teens (makeouts) sat in the left rear corner of the auditorium. And the double clocks in the ticket kiosk: “Time Now – Time Out” then run back to the car and tell when you need to be picked up.