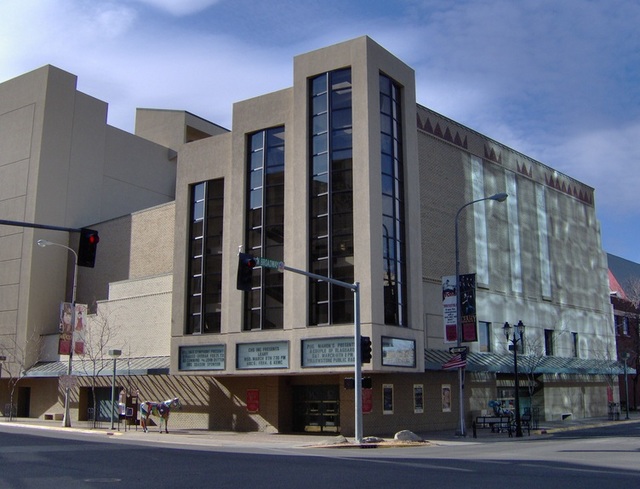 The Fox Theatre opened on November 17, 1931, with the Janet Gaynor film “Merely Mary Ann”. It was built in glamorous Art Deco style by architect R. C. Reamer. There was also a parade down Third Avenue and live entertainment opening night. The theater was built on the site of the homestead of the Bair family.

The Fox Theatre continued to be not only a movie house, but a venue for live performances for decades, long the home of the Billings Symphony Orchestra and Chorale group, as well as the Fox Committe for the Performing Arts, which sponsored live theater, musicals, and concerts over the years. Among the artists to perform at the Fox included Dizzy Gillespie, Ray Charles, and Judy Collins.

In 1978, the Fox Theatre was acquired by Carsich Theatres, which was going to convert the theater into a modern triplex. However, the Fox Committee stopped these plans, had the theater added to the National Register of Historic Buildings, and began a fund-rasing campaign to restore the aging building. Around this time, also, the city of Billings was hoping to raze the Fox Theatre and replace it with a parking lot.

Eventually, the city dropped its plans, and bought the Fox Theatre, which it leased to the newly-formed Alberta Bair Theater Corporation. Alberta Bair, a daughter of the man who formerly owned the property the Fox was built on, gave a generous gift towards the theater’s restoration, and the theater was afterwards renamed in her honor.

The Alberta Bair Theater for the Performing Arts reopened in 1987, returned to its original 1930’s beauty, with a concert by Burt Bacharach. Today, the theater is one of Montana’s premier cultural venues.

Here is a photo being advertised on eBay:
http://tinyurl.com/2rpxag

This ad for the first anniversary of the Fox was in the Billings Gazette on 11/13/32:
http://tinyurl.com/cmwlsr

I saw ‘Nicholas and Alexandra’ here in 1971 and was quite impressed with this fine house.

Grand opening ad is also in the photo section. 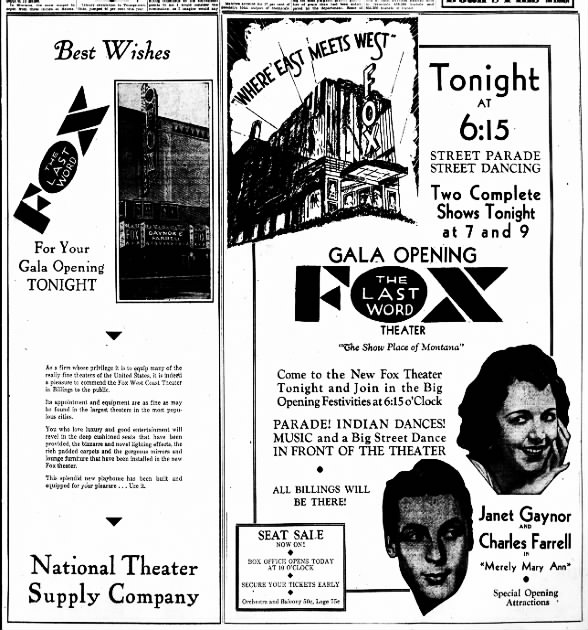 Such a shame they took the Fox name and marquee down. This happens all the time, someone comes along with major money for the remodel and the original name large marquee comes down. Needed to be called The Alberta Bair Fox. They all want their name on the buildings some way. Its still the FOX to most people in Billings.