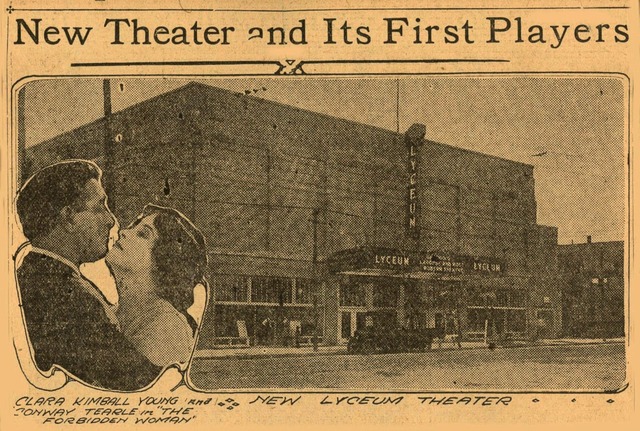 For a time in the late 60’s, I went to the Lyceum almost every Sunday afternoon with one of my buddies. On Saturday nights, I often went alone or with my brother. I remember double features of “Cool Hand Luke” and “The St. Valentine’s Day Massacre,” “A Guide for the Married Man” and “The Green Berets,” “Yellow Submarine” and “The Good, the Bad, and the Ugly,” “The Good, the Bad, and the Ugly” and “Hang ‘Em High” (a strange man placed his hand on my 12 year-old knee), “The Boston Strangler” and “The Secret Life of an American Wife,” “Night of the Living Dead” and “No Way to Treat a Lady,” “Horror of Dracula” and “Curse of Frankenstein,” “The Oblong Box” and “Premature Burial,” “Fistful of Dollars” and “For a Few Dollars More,” “Thunderball” and “From Russia With Love,” “Lady in Cement” and “Deadfall,” “Coogan’s Bluff” and “A Lovely Way to Die,” “The Impossible Years” and “Hot Millions,” “Wait Until Dark” and…what did I see it with?

For a time, they were open Wed-Sun, but for the most part it was a Fri-Sun operation. The last attraction was supposed to be a double bill of “Support Your Local Sheriff” and “Support Your Local Gunfighter” but the theater closed before they played. It was marginally more high class than the Garden on W.25th off Clark Avenue which had a hole in the screen for a long time and closed around two years earlier. The Garden was the second run (or was it third run? Yeah, third-run) theater I went to most often, and when it closed I started to patronize the Lyceum more often than I did before.