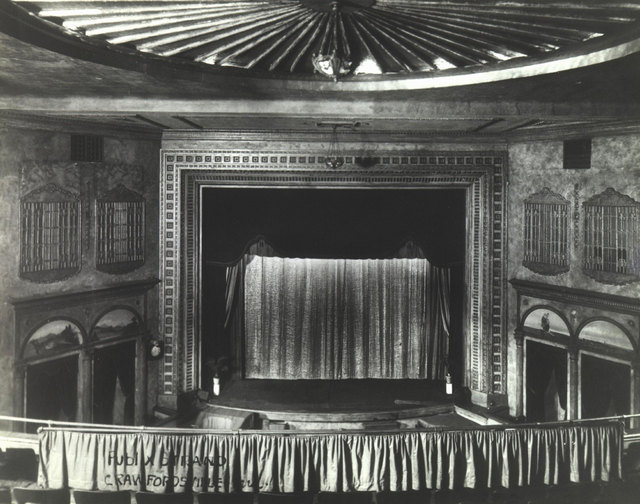 I believe it was built in 1919 for H.P. Vonderschmitt. It looks like it was one of the largest theatres in the area, and also had stores and apartments attached.

What appears to be the original color on the organ console is a silver/green mottled finish. The theatre may have looked like this at one time. Organ was installed in 1927. It is a Kilgen 3/5, Opus 3911.

In 1957 it was operated by the Vonderschmitt Theatres chain.

The Strand did indeed have this Kilgen organ, Beside being listed in the Encyclopedia of American Theatre Organs, pictures of the theatre interior in the late 1920s show the console in the orchestra pit. As with many theatre organs, it was probably removed in the 1950s or 1960s. There is a good chance it wound up in a church for many years, since the original 5 ranks would be useful for church music. The name uncovered on the console could be an organbuilder who reconditioned it for church use. In the late 1970s, this console and many organ parts were donated to the Redford Theatre (Motor City Theatre Organ Society) in Detroit by the Campbell family. The console was on display in the foyer of that theatre for a long time. I bought this console from them in 1985, first installing it in my home theatre, then moving it to a small theatre I owned at the time in Morenci, Michigan, where it played 6 ranks for a few years. 10 years later I sold it to the man who has made the first posts on this thread.

The photo is not attached that I can see. I think the name isn’t a problem, seems it could have been named that. If you can get the photo to me at or successfully post it I can verify the building. I spent a lot of time changing the marquee and working in the poster windows. Where did you get the photo?

Thanks. This is not The Strand. I’ve been away for a while but I recognize this now as a facility on Washington street a couple of blocks over from the Strand site that is used for live performance of commuity theater. You can look this up on Anywho.com as the “Sugar Creek Players Vanity Theater”. The Vanity, it seems, is still in existance but The Strand was demolished.

I saw my very first Disney movie at this theater! That was back when it was only one screen. It was sad when it became two screens. As a teenager I worked here for 4 years as a projectionist and janitor. We used to love going into the bowels of the theater and finding old posters, etc. Of course, as a teenager the historical significance doesn’t really hit you. I also remember tanning on the roof during the summer. :)

Patrick, do you recall what color the interior was? Or about when it was demolished?

I’m still trying to find more information on this place, but it seems to be one of the theatres that has very little known about it. Even the THS has a limited mount of info about it. They did send me copies of a couple neat photos though. I would see about posting them here, but I don’t know where I could upload them to.

Just got around to your note- better late than never! :) Inside the lower theater (and possibly the upper, I cannot remember) the walls were the same as when it was one large theater, before it was split into two. Those original (at least since as far back as when I saw my first Disney movie- which must have been around 1975 or so) walls were red cloth that was sort of rippled. The only reason I remember that the walls in the lower theater stayed this way is because when I was cleaning it after shows there were these huge floodlights we could turn on and the then it was quite obvious. This was not the case in the upper theater where the after-show lighting was very inadequate, so I simply do not remember. I am almost positive that I could track down either the owner or manager that I worked under in the late 80’s. It is entirely possible that this owner was the owner when the Strand collapsed- though I couldn’t be certain. His name just came to me! Amazing! He was Doug Cullins or Cullings I believe. Also, I happen to be an avid journaler since my first journal in May of 1980, so I’m pretty sure I might be able to scour those journals and find some more information since that place was a big part of both my work and social life in the late 80’s.

As far as when the theater collapsed, it was in December of 1998 (see this URL: http://www.crawfordsville.org/citytime.htm)) I also found some more information about the early history here: http://www.cinematour.com/tour/us/6199.html which says in part (quoting from that website):

“The Strand was built in 1919, contracts signed by H.P. Vonderschmitt.
It seated 1113, had stores and apartments attached, and was located at 126 S. Green St. It was part of the Publix chain and one of the larger theatres in the area.

The organ was installed in 1927 and is a Kilgen 3/5, Opus 3911. Original color appears to be a silver/gold and green mottled finish. Also appears the organ was worked on in 1959 by O.E. Shuler Co. and received some new parts around that time. That is possibly the time it was painted with the mottled finish. Location of the original pipes is unknown. Possibly demolished with the theatre."

I might be able to gather some additional comments from my mother the next time I talk with her as she still lives there and should, obviously, remember more about it earlier on than I do.

I couldn’t get that link to work; I’ll try it again later on.

The comments on CinemaTour were mine :–) I’ve been all over trying to find info on the theatre since I have the organ from it. I do have some photos, but I can’t post them here. Maybe I could send them to you and verify that it is the same building.

Please let me know if you find any more info.

Wow, that must have been taken in it’s final years of operation. Great to see it in color though!

I have some other pictures, but they are from the Theatre Historical Society, so I don’t think I can post those.

The Strand Cinema One and Two with 510 and 368 seats is now run by Nicklelodeon Productions of Indianapolis.The balcony theatre got seats from the closed ESQUIRE THEATRE. A new lobby area.The original STRAND opened in 1919 and was all new except for the outer walls which were a part of the MUSIC HALL bulit in 1884. BOXOFFICE ,May 1968.