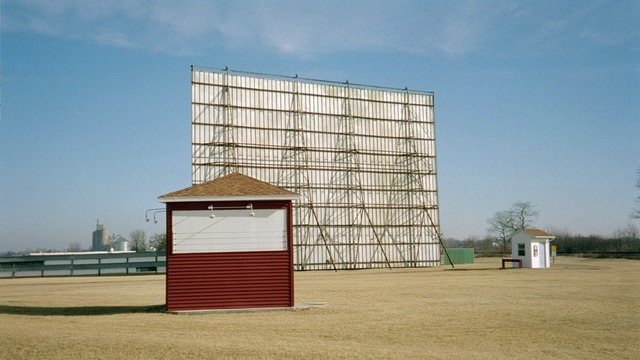 Opened in 1954 as the Dyas 34 Drive-In, this single screen theater is now just the Route 34 Drive-In. It is located just outside Earlville, off Old Highway 34. This classic drive-in shows first-run movies from April-October, and has a large snack bar. Its original marquee was torn down in 2003. The Route 34 Drive-In is one of only a handful of drive-in theaters still operating in Illinois.

I’ve been there…worth the drive if you live a distance away..One thing though…make sure there is no forecast for any potential storms in that area because you are out in the wide open spaces..

There is a fundraiser now underway to convert to digital projection.

The website still works, the drive-in is just closed for the season.

This theatre has now gone digital.

Although not noticed by the national lists, the drive-in was advertised in the local paper as the Dyas 34 from Year One. The 1955-56 Theatre Catalog listed it as the 34, capacity 300. The 1959-76 IMPAs also called it just the 34, with the oddly specific capacity of 241.

I guess the name changed when ownership changed. The last IMPA list (1988) still shows it as the Dyas 34, run by C. W. Dyas.