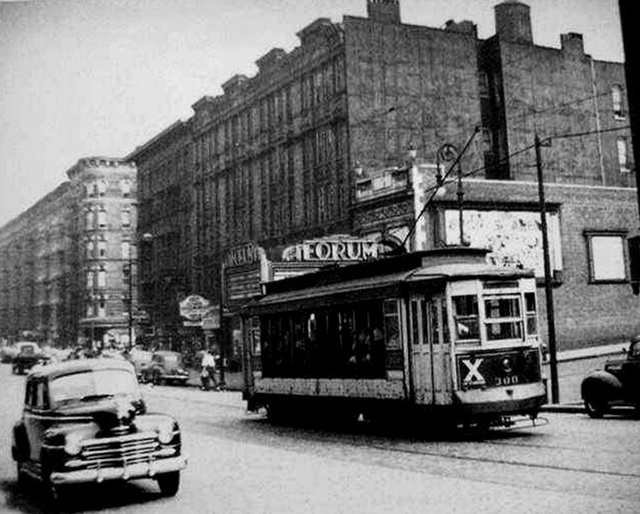 Situated in the Mott Haven section of the Bronx, the Forum Theatre first opened in February, 1923, with vaudeville and movies. Newspaper advertising claimed 3,000 seats, but no reference books have ever cited more than 2,300.

It was operated by the Consolidated Amusement Company chain but the Forum Theatre struggled to survive against competition from the Loew’s, RKO and Skouras circuits. But its luck changed at the end of WWII, when it was re-named Teatro Puerto Rico, presenting Hispanic stage shows that attracted patronage from all over the Greater New York area.

When the novelty wore off, it switched to wrestling matches, which had become highly popular on TV. Finally closing in the wake of the neighborhood’s decline, it re-opened in 1994 as a performing arts center for the Hispanic community. The auditorium was divided into three, two for “live” usage and one for showing the latest Hollywood movies with Spanish subtitles.

Unfortunately, the project failed and the site was closed. At last report, one of the three auditoriums was being used by the Brazilian based Universal Church of the Kingdom of God.

I’m suffering from that same sickness, Lost. Although, last night on my way to the huge stir-fry wok that is Yankee Stadium in this heat wave, I noticed a familiar hump-backed roof line from the window of the 4 train I was riding. I told my brother, there’s an old movie theater. When we got on the platform and were able to look down onto 161st Street, it was very easy to make out the facade of what I would learn (from CT, of course) to be the former Earl Theater. I also stumbled across the Gotham Theater and a number of other former movie houses in upper Manhattan while riding down Broadway a few times from one destination to another. Of course, each one is invariably already listed on CT, but perhaps one of these days I’ll uncover a hidden and long-forgotten gem!

Ha. Maybe that was Shea… it being a typical 1960’s cookie-cutter multi-purpose stadium. The baseball equivalent of the concrete bunker. And whatever kitschy charm that place had was lost when they removed those pastel blue and orange shingles from the exit ramp facades years ago. Of course, they are having a damn good season this year! Maybe they’ll have a three-strip Cinerama revival in the off-season. Lost, start a letter writing campaign immediately!

This theatre is mentioned in Rogelio Agrasanchez, Jr.â€™s excellent book MEXICAN MOVIES IN THE UNITED STATES.

In 1948, Cuban rhumba dancer Mexican film star Maria Antonieta Pons made a live appearance that filled the South Bronx PUERTO RICOâ€™s 2200 seats and left another 500 with standing room only at each show.

For the run of her 1949 film, her film performance in LA HIJA DEL PENAL was challenged on stage by a live performance from rival rhumba dancer AMALIA AGUILAR in what sounds like a pre- ROCKY HORROR combination of film and stage histronics that drove the audiences wild.

The Cinema Circuit PROSPECT was opened nearby due to the overwhelming suceess of the PUERTO RICO.

There is a photo as the FORUM in the book.

Ed, if you get stuck in here again I promise to send Lost Memory in before New Year with some supplies.

Ha. Thanks Al… At the moment, I am free from the Forum Theater’s clutches! Hope Santa was good to everyone. Looking forward to a healthy and happy new year for all on CT.

I can help y'all on this one! I was biking by yesterday and noticed the very large stagehouse at the bottom of the hill at Brook and 137th. (There’s a small 3-story building on ground level behind it). It also looks larger because it is – the stagehouse is at the bottom of a hill. The entrance to the theater is up and to the right at the corner of 138th and Brown and it’s the Pare de Sufrir church.

I was lucky enough to go inside and park my bike inside the lobby. The marquee is intact, it’s a triangularish shape. The ticket booth is fully intact and there are 6 poster holders in great condition (3 on each side). There is brand new white paint on the walls and ceilings, brand new red carpet throughout the lobby, hallways and auditorium and all the ornaments are intact, but they aren’t stunning, but they are decorative. There are a few chandeliers lining the front of the lobby.

I met the head parishioners who told me it was closed and I told them I love old theaters and about this site and I wanted to check out the auditorium. They obliged. They said in their newsletter and flyers to parishioners, they also call the church, “The former Puerto Rican Theatre” to honor the past. They said when they took it over, it was horribly dilapidated and they put tons of money into the place. You would never know, honestly. It’s all air conditioned now. The stage is nice and is obviously the pulpit.

The auditorium is spacious with the original seats, very comfortable. They pointed out they removed a few rows for handicap accessibility and showed the old row remnants/rivets still noticeable on the floor, painted over. They said they wanted to get rid of the seats and throw them away. I told them if they allowed me to post on here (on the front page) that they wanted to sell them, they could make some money and use it for their church and for upkeep. They agreed. The balcony wasn’t air conditioned but it was spacious. Very nice people.

I am on the on the phone with my mother. She remembers fondly the shows at the Teatro Puerto Rico. She told me the tickets were $2.00

Uploaded picture from the day.

The auditorium is definitely still mostly intact as mentioned above. It’s been whitewashed and simplified, but I’ve seen much worse church conversions.

Does the church own the building? My mom attended many shows there. I wonder, do they allow people to take photographs?