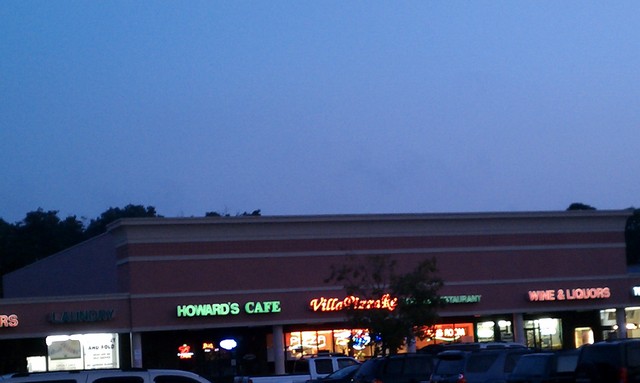 The Sunwave Twin Theater opened when the shopping center was built at the southwest corner of Sunrise Highway and Waverly Avenue, opening in 1971. It was in the middle of the shopping center, and you can still see the high roofline of the theater over the roofs of all the other stores.

Currently, Howard’s Cafe an Italian restaurant (was named La Stata) and a liquor store occupy the space formerly held by the movie theater in the Staples-Walbaum’s Sunwave Plaza Shopping Center.

The theater closed in early-September 1986, at a time when most of the other twin and single screen theaters in the Patchogue area, obviously a victim of the rash of multiplexes that were built in the area in the mid-1980’s such as the UA Movies at Patchogue right next door on the former Patchogue Drive-In property, and the Brookhaven Multiplex in Medford.

Ironically, it has come full circle, because now new megaplexes are putting the 1980’s multiplexes in the area out of business, the same multiplexes that put the little theaters out of business in the 1980’s are now falling victim. The Coram and Brookhaven Multiplexes already have closed within the last year, and the Patchogue 13 closed around 2009.

Howards moved there about 10-12 years ago when there used to be a Rockbottom Store next to Staples, and it expanded into the space where Howards used to be. Currently, it is a tanning salon, once Rockbottom went out of business. Similarly, about 10 years ago, when Waldbaums expanded, they took over the space where La Strada used to be, and they moved into the theater space next to Howards, and currently is a different Italian restaurant. Before Howards or the Italian Restaurant occupied the theater site, all three stores combined (the liquor store, Italian Restaurant, and Howards) used to be a Carpet store.

The August 4, 1986 issue of New York Magazine lists the Sunwave as showing About Last Night and The Karate Kid Part II. The January 19, 1987 issue has no listing. So it looks like the latter part of 1986 was the last gasp for this place. Combined with Joe Vogel’s post from 12/8/09 indicating that a 1971 issue of Box Office described the Sunwave as “new” it seems this theater had a pretty short life of only 15 or 16 years.

Anyway, the September 8, 1986 issue lists the SunWave as showing The Fly and Night of the Creeps, both “through Sept. 4.” Nothing is listed as beginning on Sept. 5. So it appears we’ve pinned the final official night of this theater down to September 4, 1986.

I also note that there are no listings in the August/Sept. 1986 issues for the drive-in, so clearly the multiplex was on the verge of opening.

The Multiplex must have been right on the verge of opening. By the way, the old Drive in at the Multiplex site also had an “indoor” theater for when weather was bad. That old indoor theater was incorporated into the new multiplex built around it and was the 13th theater in the multiplex.

Short life for a theatre is not unusual when you figure all the advances made and the fact that nobody builds their own anymore. Brookhaven Multiplex had 18 years.

Yes, that is a theater that really closed before it’s time, the Brookhaven Multiplex was not even 20 years old, and wasn’t in bad shape. I remember going there as a teenager, and the place was mobbed on a Friday night with lines of people waiting to get into the theaters….

Yeah, I knew the indoor theater had been incorporated into the multiplex from the comments on that theater page. Wish I’d known it when the theater was open. I would’ve made a point of checking it out. As it is, the only time I was ever to the Patchogue Multiplex was to see a late night showing of Jason Goes to Hell. Either we missed the last showing at Commack or it was sold out so we burned rubber to make it to Patchogue.

Speaking of the last show at Commack, that, according to comments on the site, it history after next week. Comments also indicate the Green Acres closed.

One of the old movie poster display cases still exists there. It’s right next to the liquor store; they use it for advertising their wares.