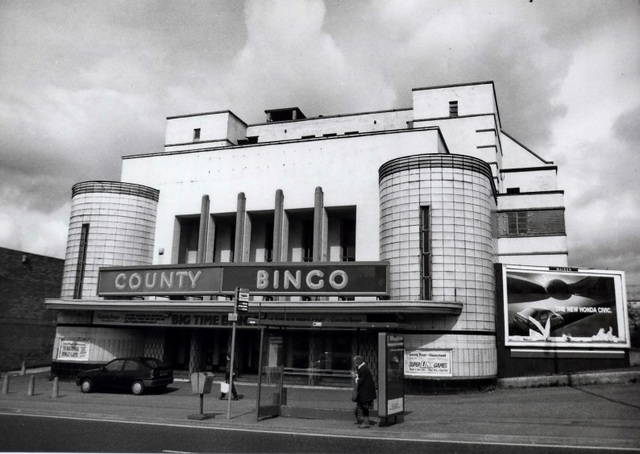 The Ascot Cinema opened on 6th December 1939 with Gracie Fields in “Shipyard Sally”. It was built for Great Western Cinemas and they operated it until February 1943 when it was sold to Gaumont British Theatres Ltd. Re-named Gaumont in July 1950 it passed to the Rank Organisation and was re-named Odeon from May 1964. Closed on 25th October 1975 it lay empty until 1979, when it was converted into a County Bingo Club.

The former Ascot Cinema was designated a Grade B Listed building by Historic Scotland on 10th July 1989.

The redevelopment of the Ascot Cinema proved challenging for the architects to ensure they kept the Art Deco facade and that it blended in with the new build element. The auditorium was demolished in 2001. On the site of the old cinema was built forty-five 1, 2 and 3 bedroom luxury apartments including five penthouses (two double storey) with private balconies and terraces. In line with the general theme, the development was named ‘The Picture House’ and each apartment was named after an icon of the silver screen.

Strathclyde homes were given a commendation for the ‘conversion’ in the 2004 Design Awards.

The Picture House is actually the name for the housing development on this site, the cinema itself was never called this – it opened as The Ascot in 1939, designed by Charles McNair, with seating for 1,963 patrons. Over the years, it changed names to Gaumont, then Odeon. It closed in 1975 to become bingo, and lay derelict for a spell before the redevelopment.

Although award-winning, the redevelopment has actually left very little of the orginal cinema intact. Only the small, twin-towered foyer block remains, behind which lie a few flats. The rest of the flats were built in a seperate block just behind the facade, where the auditorium once was. No trace of the auditorium remains, which is truly a great loss, since it was an excellent example of a suburban super. In fact, so little of the original building remains that one has to wonder what the point of affording it statutory protection was – this destruction took place despite the cinema being Grade B listed by Historic Scotland.

For an idea of how the original cinema appeared, and photographs of the demoliton and redevelopment, go to:

A 1970 exterior photograph of the Odeon, Anniesland here:
View link

A picture of the theatre as the Gaumont can be seen here.

I went to see two mules for Sister Sara here around 1971 , i used to live in Easterhouse the other side of the city i paid a visit to the old Ascot about 2 yeara ago. Glas gow did have some truly great cinemas sadly all gone. I now live in Manchester