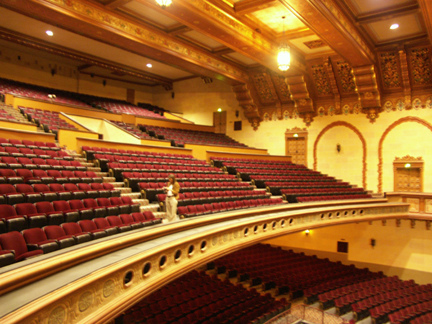 The T & D Photoplay Theatre was opened in July 1917 and was designed in a Classical-Corinthian style by architect Albert W. Cornelius for the T & D Enterprises chain. Seating was provided for 2,540 with 1,040 in the orchestra level and 1,500 in the balcony. It was re-named California Theatre in 1923 when it was taken over by the Fox West Coast Theatres chain. It was equipped with a Wurlitzer 3 Manual/ 9 Rank theatre organ which was opened by organist Albert Hay Malott and the permanent organist for the theatre A.C. Walsh. It was closed in 1929 to be extensively remodeled to the plans of architects Balch & Stanbery.

It reopened on October 14, 1930 with Spencer Tracy in “Up the River”. The Wurlitzer 3 manual 9 rank theatre organ had been retained in its original installation, and was opened by organist Inez McNeil, who had been the resident organist on the instrument.

Its glorious run of first run films lasted until 1969 when the Fox Theatre became a venue for second run movies. Finally, no longer able to support itself, the theatre closed in 1973. The original Wurlitzer organ had been removed from the theatre in the 1950’s.

The Fox Theatre was renamed for the late legendary entertainer Bob Hope in 2004.

Stockton is my home town. I left in 1956 at the age of 10. From my residential addresses then, my family would walk downtown to the “picture shows” in the evening or on Saturday. We usually approached from the east end of Main Street or sometimes took a bus and disembarked at the east end of the street.

Main Street contained a row of movie theaters down to the Fox (and possibly around the corner; not sure), they were all lit up at night and I suppose resembled a smaller version of what would have been a Broadway of movie theaters in Stockton. To a child who only had seen one city (except for San Francisco or Sacramento), it was what I thought was a typical smaller city. I did not know I was incorrect about that. Of course, the theaters didn’t seem small to me, and probably weren’t.

Stockton evidently is now actually identified as a tiny town version of a larger city. Its houses and buildings are smaller but as detailed in scale and in the preferred architectural styles of what would have been seen in larger cities. I thought the interiors of businesses then (banks and office buildings)were temples of beauty, with so much brass and marble. Brass made up some of the trim, plus there were other design details.

When we arrived downtown, we started to walk west on Main St., strolling by the movie theaters, sometimes crossing the street to the south, then back to the north, viewing the offerings and deciding which show we would see. I don’t remember anyone looking in a newspaper to learn what was playing beforehand, or if so, we still didn’t commit until we reached the picture show. (I am trying to use the vernacular of the time; I don’t think I ever heard the word “theater” employed to reference “picture shows” until I moved east.) We looked at the posters in the display windows, or took in the marquee, or noted what people coming out or going in were saying about the movie, before we would commit to buying a ticket. Then we would make up our minds. It seemed that was what everyone did then.

The point was, with this method, I don’t think we ever really made it to the west end of Main Street to the Fox but for a time or two by the time I was nine; unless I was taken there as an infant. There were always plenty of first rate shows; sometimes double features, to choose from, before we reached the end of the street. Came close a couple of times. Yes, I had heard the Fox was beautiful, or one of the most beautiful of the shows in Stockton.

So when I was nine or so, and there was a major feature film everyone wanted to see and we knew it was at the Fox, and I saw it, I remember thinking about the Fox, “This really is beautiful; maybe the most beautiful picture show on the street, but not my favorite, as others up the street were more familiar to me. Don’t remember the film I saw then. The Fox was, indeed, a richer, more historically ornate style than the others, I thought.

My problem now is that I do not remember the names of all of those other pictures shows up Main Street; just that they were there, both sides of the street and there were many of them and I saw many movies in them. (There were picture shows on the next street north too, which were low cost, and some showed triple features in the ‘50s; families could still feel comfortable in them. I remember seeing “Don’t Bother To Knock,” as the third film on a triple bill and the psychotic blond woman (Marilyn Monroe) scared me out of my wits (no doubt I related to the child in the film whom she almost kills), so that I never forgot that movie (pretty good critique, No?)

On Main Street I remember that I could not talk my father into taking me to see a Ma and Pa Kettle film (I had already seen it once), so we settled on “Winchester 73” with Jimmy Stewart. Also remember seeing High Noon, My Darling Clementine, Frances the Talking Mule pix, Martin & Lewis, Betty Hutton films and many more – none at the Fox; I just don’t remember which theaters by name.

I would add as to another theater on Main Street that was either constructed or, I think, remodeled about ‘53 or '54, the thing about it was that it reopened containing a Loge, which was a big deal in the advertising then, and everyone talked about it. Everyone wanted to go there to see the “Loge.” People could sit in the Loge and the armrests contained ashtrays, and they could smoke while they watched the movie. You didn’t even have to smoke, as the Loge seating was appealing in itself; it seemed more expansive, like first class on an airliner. It was, I suppose, designed in a type of 1950s moderne, but you couldn’t really see it in the dark. It was comfortable and in good taste as patrons expected first rate picture shows to be. Everyone liked that theater when it reopened, and it always did good business. I think it might have contained some wood paneling; didn’t look anything like a 1920s style movie house, which was not a common style in those Stockton theaters on Main Street by the time I was going to movies there. The shows were beautiful but of a West Coast vernacular. They emphasized values different from what I would see in the splendid heavy ornateness of movie houses in the Middle West a few years later.

Upon entering the house you would turn to the side aisles and walk up a number of steps to the Loge and turn in. I don’t remember if once at the Loge landing, you could then walk forward, back down steps to the lower level and seating there. Maybe it was blocked off.

The only other comment I can add here is that I was born shortly after WWII. In those days, Stockton was full of ex servicemen and others relocating there, and there was a shortage of proper housing. Whole other story. People were making do in cramped quarters everywhere. Thus, that was another motivation to spend warm evenings after work, if not sitting outside on the steps, or inside listening to the radio, if one could, downtown going to picture shows. There was a lot of pedestrian traffic in downtown Stockton then; lots of “bars” including a fair number of cocktail lounges, and diners; all of a mood, plus the courthouse was down close to the Fox. A film crew came up from Hollywood to film, and had advertised in the newspaper for locals to come out that night and stand as a crowd for a film (for a newsreel footage sequence). There were no stars in the scene; although I believed I had seen Mercedes McCambridge there. We had been to a movie and coming back, with me being held by mother, stood at the back of the crowd being filmed for possible use in the movie about Huey Long, which was “All The Kings Men,” and it won an academy award too.

Here is an October 2004 article from the Hollywood Reporter:
http://tinyurl.com/ddubmy

Nice picture Tom. Looks good that they left the FOX vertical on the building.

Even though the theatre changed name to BOB HOPE THEATRE, It was good they still recognized, and left the original name on the building.

Looking for an old theater I can convert into a full time church/concert hall but keep the historic splender of the theater. let me know if anyone can give a me leads and tips. prefered in the Northern California area. thanks. 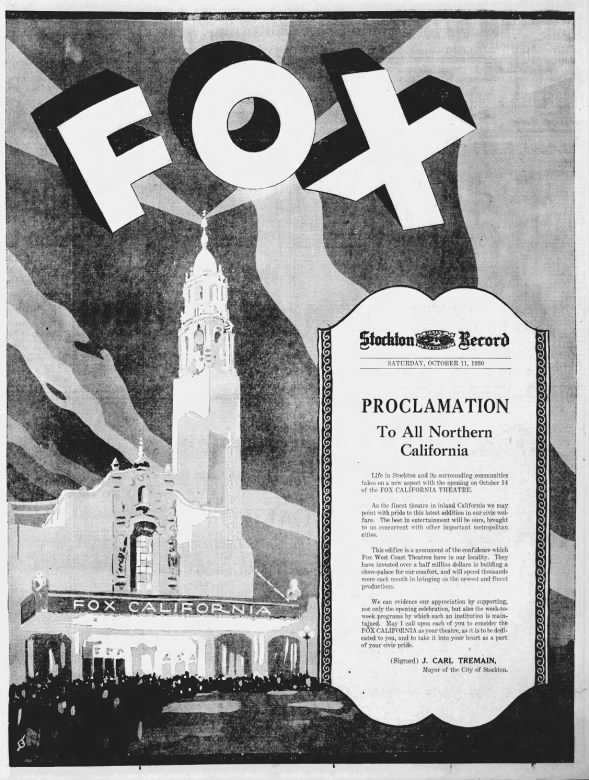 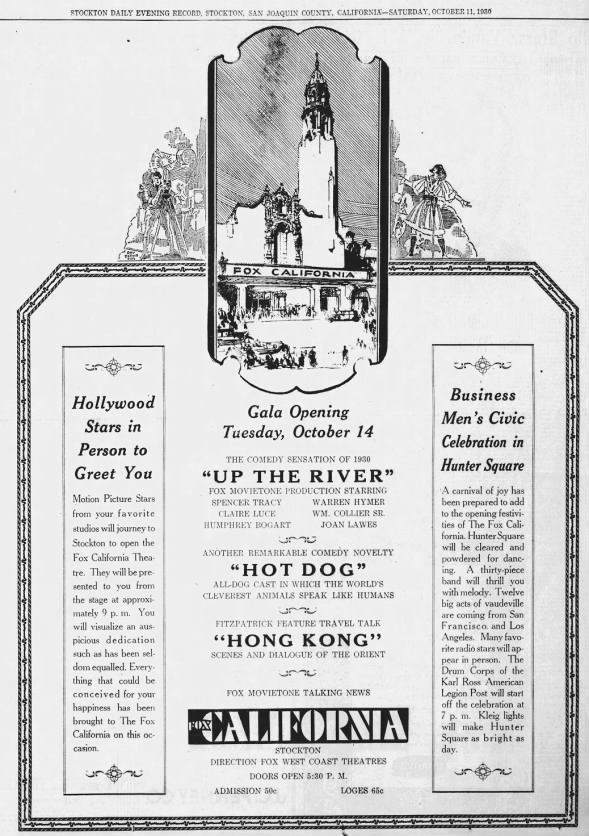 In June 1956, the listings became simply “Fox” from “Fox California”