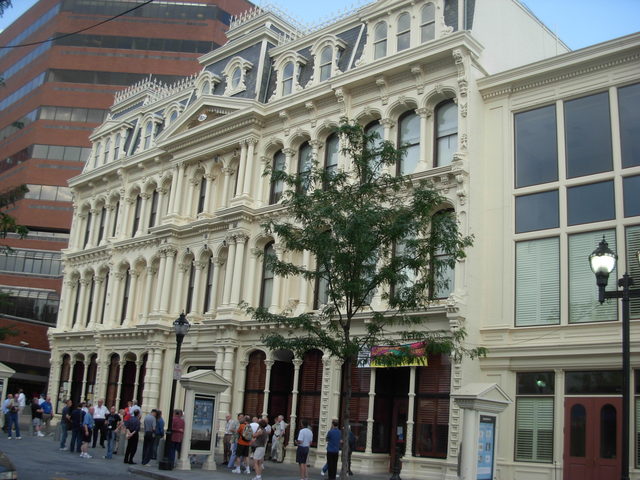 Built in 1871 by the Freemasons, the Grand Opera House opened December 22, 1871 and evolved into a vaudeville house by the turn of the 20th century. Later, it became a movie theatre, operated by Harris Amusement Co. In 1930 it was taken over by Warner Bros. Circuit Management Corp. It was closed around 1967.

The Grand Opera House was restored during the 1970’s as a peforming arts center and continues to entertain audiences in its massive auditorium.

This season (04-05), The Grand Opera house is having a classic film series, the first time they’ve shown movies there for a while! I;m very excited. Creature from the Black Lagoon (3-D), Casablanca, White Christmas, The Wizard of Oz, Rear Window, and others will be shown.

The Grand Opera House in Wilmington DE is listed in the 1897-98 edition of the Julius Cahn Official Theatrical Guide. The seating capacity is given as 1,330. Ticket prices ranged from 15 cents to $1. The manager was Jesse Baylis. The theatre was on the ground floor and had the “Edison system” of electricity. The proscenium opening was 40 feet square, and the stage was 45 feet deep. There were 7 members in the house orchestra. At the time, there were 4 newspapers in Wilmington, one of which was the Frei Presse, apparently a German-language paper. Hotels in town were the Clayton, Dennings, Delaware and Central. The 1897 population of Wilmington was 70,000.

The Grand Opera House (Grand)was part of the acqusition of the Harris Amusement Company of Pittsburgh by Warner Bros. in 1930. It operated as a movie house by Warner Bros. (Stanley Warner)until about 1967.

If I’m not mistaken, they do sometimes show older classic movies here occasionally….it might have been Gone with the Wind or something.

There’s another theater attached to it, the Baby Grand. Not sure it’s history or if it ever showed films.

I worked here as an usher in 1958 $ .50 hour Always a double feature – Saturdays 10 cartoons and a chapter – What great days those were Gary Edens

In re: “Dockstader”; I’ve seen Dockstader referred to in relation the the Garrick Theater, which was a few doors away, at 830 Market St; that theater was in operation from 1911-1927, and had been a vaudeville show house before showing films. The Grand had only one name since opening, as far as I know: Grand Opera House and Masonic Temple. In re: The Baby Grand: that is a new theater, built in 2000, in what used to be the Loew’s Aldine Theater, at 806 Market St. It is owned and operated by the Grand Opera House. I know nothing more about it.