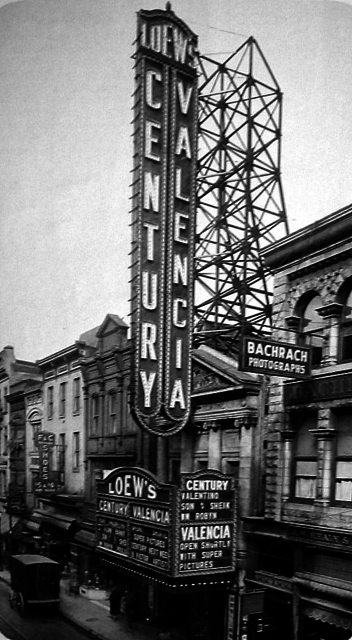 This John J. Zink-designed theater was opened on May 7, 1921 with Mae Murray in “The Guilded Lily” and Ernest Lubitch’s “Deception”. Located on W. Lexington Street between Charles Street and Cathedral Street. Seating 1,400, the Loew’s Century Theatre was built with an upstairs ballroom which opened on October 29, 1921. The Century Theatre was equipped with a Moller organ, but this was replaced by a Wurlitzer 3 manual 11 ranks instrument in mid-1926.

In 1926, the ballroom was converted by John Eberson into another movie theater, the Loew’s Valencia Theatre, designed in an Atmospheric style. The Century Theatre featured a somewhat plain and small boxy marquee, but a huge vertical sign spelling out, originally, “Loew’s”, which was later changed to “Century”.

The Loew’s Century Theatre closed on January 8, 1961 (the Loew’s Valencia Theatre had closed in 1955). In the summer of 1962 the building was razed to make way for the Charles Center, an office complex.

Great pictures of the LOEWS CENTURY.

The biographical info, on the theater, states that it closed “during the 1950’s”. Actually, it survived until the end of 1959, or early 1960, at least. I saw at least three films there in 1959, which I was able to verify at a movie database website, which gave release dates for the films (“The Bat” with Vincent Price, and “The Hound of the Baskervilles” with Peter Cushing ; also “The Mummy” with Peter Cushing, again). The last film, I can remember seeing there, was “Journey To The Center Of The Earth” (with Pat Boone) which had it’s NYC premiere in December, 1959. This implies that the Baltimore release would have either been the same month, or in early 1960. The block in which the theater stood was razed, in 1962, for the “Charles Center”, Baltimore’s first urban renewal project during my lifetime. So far, I’ve not been able to find any info on exactly when the theater closed. My educated guess is for a 1960 closing, since I can’t recall seeing any later films there.