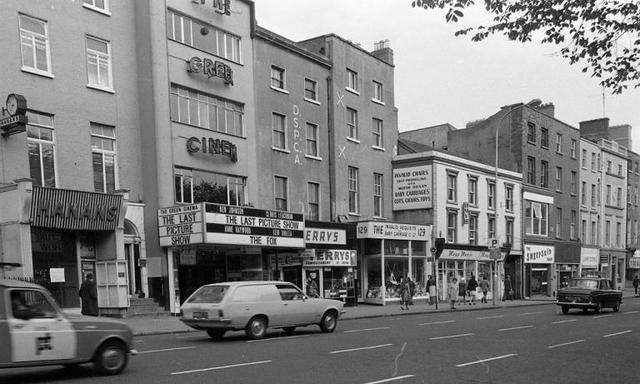 This cinema opened on 18th December 1935 and was originally called Stephen’s Green Picture House. It was designed in relatively plain Art Deco style by the firm of Jones & Kelly. The auditorium was only somewhat more ornate than the exterior.

It was ‘twinned’ in the 1970’s by converting the restaurant space into a 2nd screen, leaving the main auditorium intact. It closed on 7th November 1987 and was demolished soon afterwards.

A Planet Hollywood restaurant was later built on the site, which has since been closed.

Once the largest, and for many years the only, cinema in the prestigeous Grafton Street area of Dublin, which is still the most expensive shopping street today, the Green was sacrificed for a major redevelopment of the site for shopping development,which took some years before it was built. (Most city centre Dublin cinemas were on the North side of the River or very close to it.) This cinema was located roughly where the TGIF Restaurant is now, the more appropriately named “Planet Hollywood” venture having only lasted a relatively short time there.

My uncle was the projectionist there in the 1970’s. The site was actually slightly further up to the south of the block than the Planet Hollywood/TGI Fridays site, I think it forms part of either the former Bank of Scotland building or the Fitzwilliam Hotel, perhaps partly both.