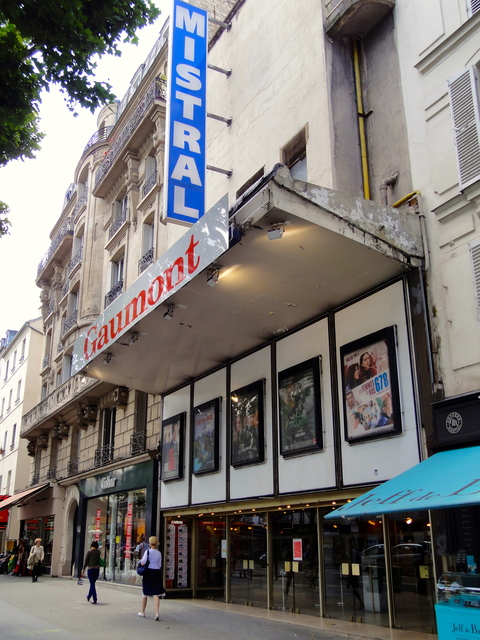 Located in the south of the city centre. This early 20th-Century neighbourhood theatre originally opened in 1911 as the Theatre de Montrouge, a live theatre presenting operettas, comedies and vaudeville etc. It received an Art Deco style remodelling in 1932 and converted to cinema use, operated by Joseph Rytmann. It was closed on 13th June 1951.

During the summer of 1951 a new cinema was constructed inside the walls of the old theatre to the plans of architect L.P. Grandin. The new auditorium had a big and deep balcony with 500-seats and 700-seats in the stalls at the ground floor, giving a total seating capacity of 1,200. It was renamed Mistral, a wind which blows at the south of France, because the location was near the southern border of Paris. The Mistral was opened on 6th September 1951.

In the 1960’s the Mistral was a first run movie theatre and had 70mm equipment installed in order to present “How the West Was Won”. At Christmas-time, Disney movies were a big hit each year. Many James Bond movies were hits there too.

The wide screen was hidden by a curtain which opened from the left side to the right which took more time than a two piece curtain.

In 1972, the theatre was twinned, and later, the upper lobby the basement and the ground floor space were rebuilt giving four screens added to the 420 auditorium.

On the other side of the avenue, the seven screen Gaumont Alesia multiplex added to the five screens of the Gaumont Mistral, making this a movie spot for this district of Paris. The Gaumont Mistral was closed by early-2018 and was demolished in August 2018.