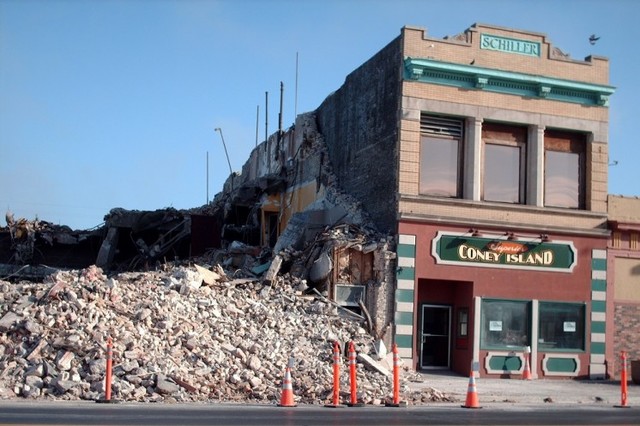 The Palace Theatre was opened on March 26, 1917. By 1926 it was operated by the Finkelstein & Ruben chain. They were taken over by Publix in 1929 and were later merged with Paramount Pictures Inc.

The historic theatre closed as a movie theater on April 22, 1982 and went over to use by a church. They later vacated the building and bricks began falling off the vacant building.

In 2002, the city took possession of the building after it was seized by Douglas County for back taxes.

Estimates to renovate the theatre to its former grandeur are between $7 million and $10 million. The city council said someone needs experience in theatre restoration, getting tax credits and a plan to operate it for them to keep it open.

There used to be a nursery downstairs complete with a merry-go-round and sand piles.

The structure was built with ornamental brick with inlaid panels and the front featured an elaborate design of white terra cotta, pillars and an ornate canopy. Mosaic tiles inlaid with the theatre’s name in scrawling script were at the entrance.

Broken plaster lies on the floor beneath a private balcony, leaving only rusted exposed mesh in front of the once-ornate box. Seats are all the stage and bird droppings are all over the stairways.

In November 2006, the Palace Theatre was demolished.

Here are minutes from the Board of Supervisors in December 2001 regarding transfer of the Palace to the city of Superior:
http://tinyurl.com/qeqq2

I have done a fair amount of research and exploring of the Palace Theatre over the years as part of several different efforts to consider restoration of the historic building.

When I have some time, I will make a detailed posting that describes the timeline from initial construction through a series of alterations to the lobby, marquee and front entryway. I have explored almost every inch of the theatre in visits over the years. In the 1980s, shortly after closing, it was in fine shape except for a bit of dust and grime. I walked through the basement playground area (none of the playground equipment was there), through the tunnel under the main house, past the dilapadated dressing rooms under the stage, by the animal cage room (from the vaudville era), up through the main house to the very top of the massive balcony and into the cramped projection booth. The projectors are still up there!

Not long after it closed in 1982, the Victory Fellowship took over the building for a church. And over the years, they did things like remove seats (most of which seem to be stacked on the stage now) and tore out some of the lobby (which was really just a horrible art deco change from the original design anyway). But they really just left things in a state of half destruction. During the 1990s, while the building was essentially abandoned, the pidgeons moved in with a vengance! It was the midwest’s largest pidgeon coop for many years until the city took possesion and eventually boarded up the windows and entry points.

Fortunately, copies of the “original” Rapp & Rapp blueprints exist. They are part of a collection stored in the Northwest Architectural Archives at University of Minnesota. They were part of the Liebenberg and Kaplan collection, a firm noted for designing more than 200 motion picture theatres in the Upper Midwest, many of the early ones featuring an art deco style. The Liebenberg & Kaplan Papers included copies of the Palace Theatre plans because the firm was responsible for all of the remodelings of the Palace through the years.

I obtained photo copies of the plans back in the early 1980s as part of the initial effort to save the theatre, and possibly return it to it’s original use as a stage theatre. Those copies were lost over the years and when the newest effort to rescue the theatre came about in late 2003, I returned to the Archive. This time I procured digital scans of all the plan sheets including initial construction plans and all the remodeling project plan sets. The Douglas County Historical Society has those scans in their collection now.

I will do a more complete posting including the timeline of alterations to the Theatre and hopefully some photos from the early years through present day.

If you want to help save this structure, contact the Douglas County Historical Society to see what can be done. At the very least, the structure could use a massive volunteer effort to clean the place and patch the holes that are allowing deterioration to continue.

The end of the Palace Theatre is probably coming very soon. Here is a link to the Daily Telegram Article:

Here is the first portion of the article:

The final curtain may fall tonight for Superiorâ€™s historic Palace Theater.
The City Council will consider rejecting the sole proposal to redevelop the historic 1102 Tower Ave. vaudeville and movie house. Councilors also will consider disbanding a task force created to find a developer who would restore the theater to its former glory.
The decision could make the theater a thing of the past on the cityâ€™s landscape.

Sadly, the Palace Theater was demolished on Wednesday, November 1, 2006

Does anyone have any pictures of the building to share?

I suppose the page below has pictures taken inside the Palace Theater. Somebody could confirm this ?

Mural of the theater: http://douglashistory.org/index.php?option=com_content&view=article&id=122&Itemid=166

To belatedly answer Yves Marchand’s question, yes the photos on that page do depict the Palace Theatre.

Prior to the theater’s destruction, a tour of the Palace was captured on video, and it can be watched on this page at the Internet Archive. It can also be downloaded in either of two formats, and if you have problems with the video there is also a page with several thumbnail stills. Many of the interior shots are extremely dark, but the video is still worth a look. Running time is 7:22.

An announcement of the start of construction on the Palace appeared in the September 16, 1916, issue of Moving Picture World:

“Duluth, Minn.—We have received from Frank N. Phelps, manager of New Grand Theater Co. of Duluth, Minn., the following communication: Contracts for construction of the Palace theater at Tower avenue and Eleventh street, Superior, Wis., by the Cook Amusement company, have been let. The amount of the contract was withheld by the amusement company incorporators, the Cook Brothers and Frank Phelps of the New Grand theater. Furnishings for the house, heating, ventilating and lighting will be contracted for later.

“Work on the theater building will begin Monday and it is hoped to have it completed by January 1. The house will be 50 x 140 feet, constructed of reinforced concrete, brick and terra cotta. It will be fireproof and will have a seating capacity of 1,200 on two floors.”

I failed to explain in my previous comment that the page of thumbnails can be used to start the video at the point each thumbnail depicts, so you can watch any particular segment over again. Just click on it.