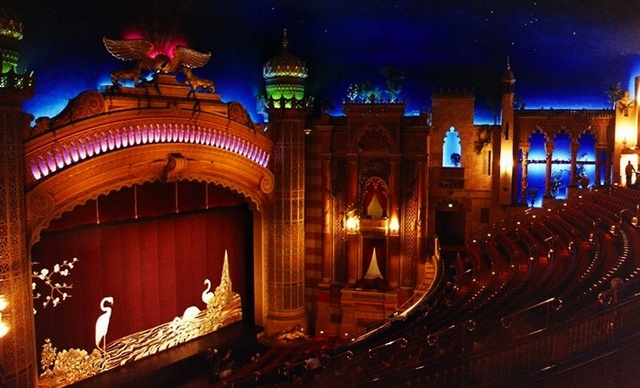 Located on the corner of Queen Street and Wellesley Street in Auckland city centre. Built in just eight months and opened on 20th December 1929 as a ‘talkie’ picture house. Designed in a lavish Atmospheric style, the Civic Theatre was equipped with a Wurlitzer 3Manual/16Ranks organ. The theatre showed movies exclusively until 1998.

In 1999, as part of an extensive renovation the main auditorium stage was enlarged to accomodate plays, opera, ballet, etc, and every July/August it hosts the New Zealand International Film Festival.

In addition, the Civic Theatre is the New Zealand home of large-scale international musicals (Matilda the Musical", “Aladdin” and “Mary Poppins” etc). and is a much loved Auckland landmark.

The Civic Theatre is a New Zealand Heritage Category A Listed building.

The Civic in Auckland DOES show movies, though not every week. This theatre is a stunner and is the venue for the annual Movie Festival in Auckland, New Zealand. The atmosphere inside, with twinkling stars that replicate those of the Southern Sky creates a buzz in the audience before the movie – this place is one of the most loved landmarks in Auckland New Zealand. Watch, just 90 seconds before the curtain opens, for a shooting star that whisks through the left hand side of the sky. Most people miss it – but it always creates an extra little ooh-ahh of excitement that makes movie going here a complete treat. Seating 2300 and splendidly renovated, this is one of the great cinemas of the world.

I caught a film at this nice theatre during Auckland’s International Film Festival in July of 1996 when I was touring Australia and New Zealand. (I’m from New England.) The movie was “Carmen Miranda: Bananas is My Business.”

The Civic is equipped with state of the art projection and sound and has an exra large screen. It is home to the annual Internationl Film Festival as well as the occaisonal film screening, but is not part of ‘chain’ of exhibition distribution. The original ‘flamingo’ curtain is only used for film screenings.

According to the internet movie data base site (imdb.com), the interior of the Civic stands in for the interior of the fictional Alhambra Theater in Times Square where the great ape is put on display in Peter Jackson’s remake of “King Kong.” I saw this movie last night and the Civic’s gorgeous interior is on good display itself throughout the sequence – that is, until Kong breaks free of his chains and starts smashing up the place.

When this film comes out on DVD, Times Square enthusiasts will wear out the “pause” and “advance frame” buttons on their remotes as they try and freeze frames and take in the splendid detail in which Jackson has digitally recreated the Square circa 1933. If I didn’t know any better, I might have thought the crew were somehow transported back in time to film on location!

Anyway… I trust the good people of Auckland are grateful to have a showplace as magnificent as the Civic still in theatrical and cinematic operation. Not a single atmospheric theater remains in use (other than a few conversions to houses of worship) on the isle of Manhattan – or in the rest of the boroughs of NYC for that matter. Shame on us.

The theatre’s website, listed above in the introduction, cites one C. Bohringer (of the firm Bohringer, Taylor and Johnson) as the Civic’s architect. There is no mention of John Eberson’s involvement at all. The description states “Ebersonian” implying the design in Eberson’s style but supporting that it may be the work of another. Perhaps there should be a correction here.

Whilst the atmospheric style of the Civic is in the style of a John Eberson theatre, his firm had no involvement in the Civic. The Ausralian architects had contacts with Eberson’s firm and he was initially on the credits for Sydney’s Capitol Theatre. There is no doubt about the influential style of the Civic and it is called an Eberson style theatre -but no Eberson involvement occured.

Here is a 1961 Newspaper advert for the Civic detailing it as the “Showplace of New Zealand” screening in Cinemascope – Butterfield 8
http://www.fungusfilms.co.nz/interior/retro.html