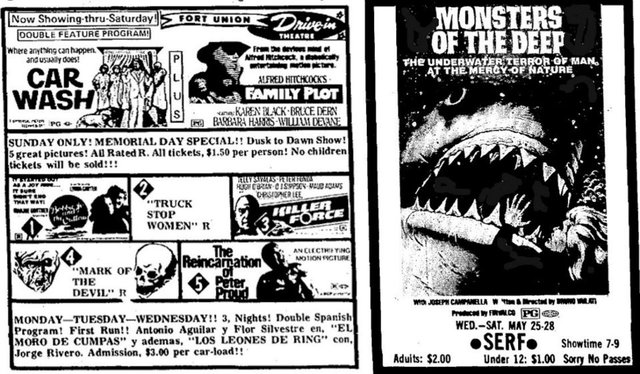 The Fort Union Drive-In is one of only a couple of drive-ins remaining in operation in New Mexico. In the late-1960’s, there were over 45 in the state.

Located to the north of East Las Vegas, it opened in May or June 1960, this single-screen outdoor theatre has parking for 350 cars. It operates on Fridays, Saturdays and Sundays from May through September.

Google maps is WAY off on this location. You can find the drive-in by using the address of 2878 7th Street, Las Vegas, NM 87701

I’m not claiming that this is the correct address, just that Google Maps finds the drive-in at that location.

All above roads lead to downtown! To map correctly, approx. address is New Mexico 518 & Pino Rd.

The Fort Uniion has made the conversion to digital projection but this was the story in 2013. ​​New technology requires that our theater undergoes an upgrade to digital equipment and projection room. Preserve one of two Drive-Ins left in NM Fort Union Drive-in Movie Theater Drive-In Theaters have been a part of the American fabric for decades. There are around 350 left in the nation and only two left in New Mexico. One is located in beautiful Historic Las Vegas, New Mexico. The Fort Union Drive-In was built in 1958 and has been a much loved summer tradition for Las Vegans both young and old. It was once referred to as the “Cadillac” of outdoor theaters because of our “State of the Art” film projectors. Today those projectors are becoming obsolete. Technological advances in the film industry are forcing Drive-In theaters across the country to switch from 35 mm Film to Digital Format as they are beginning to phase out 35 mm film prints in favor of digital. Like many other drive-ins across the United States, we are facing the pressing conversion to digital projectors. We are estimating that the total upgrade could cost upwards of $80,000. It is necessary to build a new, more efficient, climatized projection booth and our idea is to preserve the old projection room as a kind of museum. It houses two statuesque film projectors with original carbon arc lamphouses and the original tube amplifier and backup amplifier. A short film was made by Brennan Foster to historically document these lamphouses. This film took honorable mention at the Taos film festival in 2009. Movie buffs are generally pretty impressed with this projection room and probably in the future it would make a great set for a movie.The Fort Union Drive-In sits on nearly 7 acres on Highway 518 and could be used for a variety of outdoor events such as car shows, concerts, film location etc. There are a lot of possibilities and a lot of potential for all sorts of different venues. Our 35mm film projectors, which have been in use since the drive-in was built will be useless soon. If we are unable to make the necessary changes forced on us by the film companies, the Fort Union Drive-In will have no other choice but to shut down after this year.

They do have a facebook page Their address according to their facebook Page is 3300 7th St , Las Vegas, New Mexico 87701

New pictures in the Photo section.

The April 4 1963 Las Vegas Optic wrote: Announcement was made today by Les B. Dollison, owner of the Dollison Theaters in Santa Fe, that his company has purchased the Las Vegas Fort Union Drive-In Theater from its former owners, Ward and Elaine Olsen and H.C. Mitchell.

Then again, the Fort Union Facebook page says it has a capacity of 340 cars. Either Chris1982’s quote of 1958 is wrong or maybe that’s just when the Vegas was renamed. I just don’t know.

There was two drive-in theatres in Las Vegas, NM. The Vegas and the Fort Union Drive-Ins. The Vegas Drive-In is listed on CT also.

Here’s a note to add to the confusion. The June 20, 1960 issue of Boxoffice wrote: “LAS VEGAS, NEV. – The new 700-car Fort Union Drive-In was opened here recently by John Wolfe. A Spanish-language picture is included on each Tuesday night bill.” (That note was also summarized in a retrospective list the following January in Boxoffice.)

Spanish-language films tend to play better in New Mexico than Nevada. And of course, there was never a Fort Union drive-in in Nevada. Which is understandable because the old Fort Union, commemorated in the Fort Union National Monument, was less than 30 miles away from what is now New Mexico’s last active drive-in.

It’s not a very good photo, but with newspaper information so spotty, this reinforces the idea that the Fort Union opened in May or June of 1960. 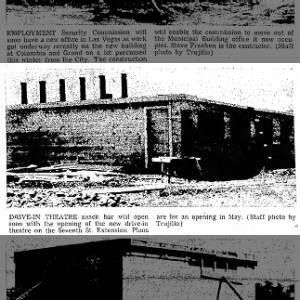