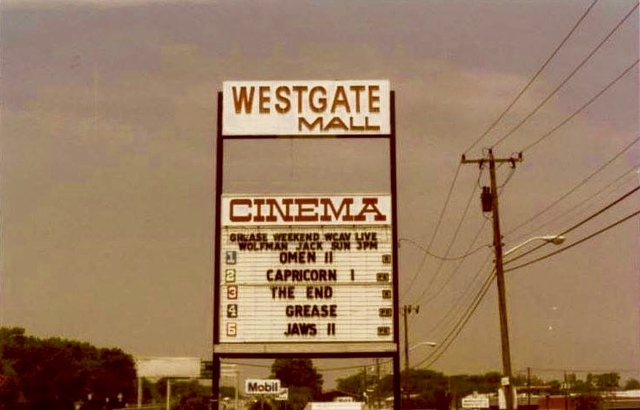 This was originally built in 1965 as a twin by General Cinema. In 1971 it was four screens, the two additional ones were built by Interstate Theatres Corporation out of Boston, MA. It was later increased to seven screens, and was operated by Hoyts. The theater closed in October 2004, and was razed during the summer of 2005.

An article in the Patriot Ledger of March 24, “Credit Crunch – Westgate Mall Theater on Hold” says that financing problems have put a temporary halt to construction of the new 12-screen National Amusements cinema on the site of Macy’s at Westgate Mall. The site has been cleared and is ready to go. Construction was to have begun this spring. The mall owner says that construction is now postponed to within a year. A Brockton city councilor expects a delay of 6 to 12 months.

This news is unfortunate, but given Redstone’s current sad financial status, I’m quite sure he could use the reprieve.

It baffles me that National Amusements is even THINKING of putting another theater here. As dwodeyla said above, the Showcase Cinemas in Randolph is a short trip up Route 24. It’s what killed this previous theater in the first place, or at the very least, a major contriubiting factory. I don’t see any theater succeeding here, as long as the Showcase in Randolph is around. It will simply out-draw it.

And even if that goes(which it won’t, trust me), about the same distance in the opposite direction gets you to the Silver City Galleria in Taunton, and a multi-screen Regal Cinema. No winning here, either way.

In the business news in yesterday’s Quincy Patriot-Ledger there is an article titled “Prospects for Westgate theater dim”. It says that the site of Macy’s store is clear and ready for construction. But it now looks highly unlikely that National Amusements will proceed there with their plan for a 12-screen cinema. “Ward 7 Councilor Christopher MacMillan said the theater plan may be dead. ‘It looks like it’s not going to happen’, he said.”

There was a brief item about development on this site in the business news of the Quincy Patriot Ledger a few weeks ago which stated that plans for a proposed cinema fell apart.

Aerial posted of the old theatre

1965 the theater open as a twin, I was the third asst. and was transferred a number of times and returned in 1968 as the third manager I opened the second twin which had its own box, concession, and both, the name at that time change to CINEMA CENTRE the theater played first run other Boston area theater were sub run, the theater at the time was number one in the company GENERAL CINEMA, I was transferred to Denver as division manager, the first manager Larry Gleason also move on to open Braintree Cinema l & ll, later became division manager of Ca. WESTGATE CINEMA ONE SEATS 952, TWO was 526 seats, THREE 750 SEATS, and CINEMA FOUR 580 seats this theater remain one of the top gross theaters for many years.

General Cinema was issued a permit to build two more screens at its Brockton Westgate complex on December 29, 1969, according to an article in Boxoffice of January 26, 1970. Construction (by L. E. Hogg Construction of Hartford, Connecticut) was slated to begin as soon as the weather permitted. Estimated cost of the project was $400,000.