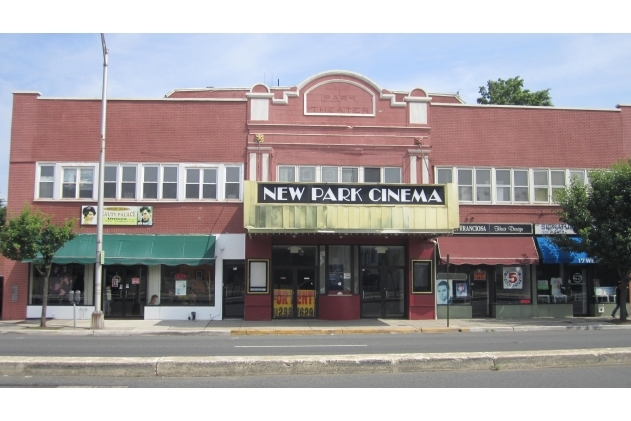 The Park Theatre was opened in 1927. The New Park Cinemas were closed in February 2010. Under new ownership it will reopen in early-2020 as the Artistica Cinema, screening classic & revival movies.

In the 1970s and the early 1980s the Park was still a single theater. It did not have a balcony – it was what they call today stadium-type seating. The entrance into the auditorium was in the center with the stadium seating/loge on either side. The aisles were in the center and on both sides. It was a wide theater.

It had a large ornate, circular relief in the center ceiling where there was probably once a large chandelier. By the time I saw this place, it ran double features for a dollar and later two dollars. I saw many good double bills here and I remember the Park fondly. Not much money was put into maintenance which meant some sticky floors, broken seats, and beatup restrooms painted in odd colors.

There were several leaks in the ceiling ornamentation which resulted in water-damaged plaster. Years later I returned to see it when it was quad-ed. It was cleaner and a lot more expensive but it had lost its charm.

As the only theater in Roselle Park, and with an organ having been installed in 1927, the Park Theatre must have been this project noted in the “Theatres in Construction” column of Variety for December 1, 1926:

Architect Willaim Friedberg opened his office in Newark in 1922, but I’ve been unable to find out anything else about him.

hello all my self and my business partner are looking to open a movie theater any investors looking to go in we would love to talk .

i wish i could buy this theater i been going there since i was a kid. It’s since for rent they really want someone to fix looks clean inside from the pics. i hope someone reopens it been since there closed since 2010

Saw quite a few movies here in the early 90’s. I specifically remember seeing CANDYMAN and EVENT HORIZON. It was a nice theater.

Saw tons of movies there. Its still for rent since it was closed in 2010.

We are very proud to announce that New Park Cinema will be re-opening as Artistica Cinema. We currently expect to be re-opening around the end of this year (2019). The venue will re-open as a movie theater. The Artistica International Film Festival will take place at the theater. Apple Box Film School will also be enrolling students for film courses at the theater during after school hours from 4:00pm – 5:30pm. To learn more and stay up to date visit artisticacinema.com. We appreciate all the support and word of mouth to help promote our theater re-opening in Roselle Park! If you are interested in lending opportunities at fixed rate of returns email or .