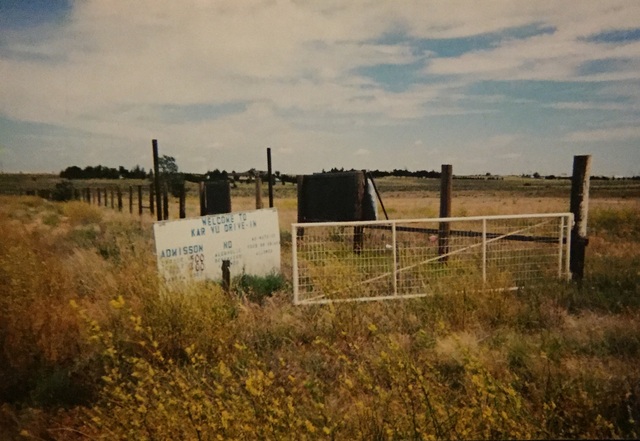 The Sunset Drive-In was opened on July 5, 1957 with Fess Parker in “Davy Crockett and the River Pirates” & “Man in Space”. It had a capacity for 350-cars, In 1961 under new operators it was renamed Apache Drive-In". In 1966 another operator took over and it was renamed Kar-Vu Drive-In with a capacity of 165 cars. It was open from May through September and used traditional drive-in speakers for sound. It was closed in 2000 and a hotel has been built on the site.

I visited the Kar Vu on July, 10th, 2010. Most everything is still there and in great shape. The siding and “screen” part of the screen tower was removed and the tower its self was tipped over so that the screen area now lays on its face on the ground, however the steel skeleton is still laying at the front of the theater intact. A company was attempting to buy the property to build a motel on the site and began demolition but the deal fell through before they got very far. All speaker poles have been removed as well as most of the fencing but the ramps remain, although overgrown with weeds. The one story, cinder-block snack bar/concession area is still there and in pretty good shape. The booth is complete with all accessories (including old trailers) but the rectifier, xenon lamphouse (4k watt) and platters are gone. The Simplex E-7 projector still sits there on a Ballantyne base with a flat lens in the barrel. The snack bar is rather empty but still has its vintage popcorn machine and grill. In between the booth and snack bar area, there is a small viewing area with about 20 seats and 2 speakers where patrons could sit and watch the movie without a car. The theater was owned and operated until the year 2000 by Ms. Ruby Ross who also owned and operated The Capitol Theater in town until the same year. The theater did switch to FM radio before closing.
With major renovation to the screen and some cleaning up and updating in the booth, this theater could easily be reopened but time is running out as more and more years of neglect occur. The residents of Springfield would love to have it back!

Status Should Be Changed to “Closed” as opposed to “Demolished”

so does the skeleton screen which is on the ground!

The skeletal remains can be seen in the most recent Google Street view which is from September of 2012. If you look closely at the current aerial view, which is more recent, the skeleton screen is gone.

If anyone every reads this. Please get Mr. Stuart Eskew to contact me at 918-534-6957 Country Arbor Independence Cinema Theatre’s. Wayne Yeazel. I’m working on two closed Drive In Theatre in Oklahoma and one Theatre. I would like to know if I can reopened it.

According to a magnificent article by Mark Wolfe in the Winter 2007 issue of Colorado Heritage, the Kar-Vu had a long and confusing history. The article, “Silver Screens Under Starry Skies,” is hard to find (cough Google), but here are the high points:

Mr. and Mrs. Marvin Bell and Mr. and Mrs. Everett Toomey of Sunray TX announced in 1957 that they were building the Sunnyside, but when it opened on July 4, 1957, it was advertised as the Sunset. It had a 35x70-foot screen tower and could hold 350 cars. The opening program was “Davy Crockett and the River Pirates,” “Man In Space,” and a cartoon.

In 2000, Ruby Ross sold the Kar-Vu and the local indoor Capitol theater to Trent and Anna High. A windstorm hit the Kar-Vu in 2002, taking panels off the screen tower. The article pretty much ends there.

Looks like Wolfe had one detail just a little wrong. The Plainsman Herald of Springfield’s July 4, 1957 issue proclaimed that the Sunset would open the following evening, July 5.

Also, early ads called it the “Sunset Drive Inn Theatre”. What was up with that double n?

I’ve found the answer to this mysterious quote in Boxoffice. First, that quote:

Boxoffice, April 16, 1949: “SPRINGFIELD, COLO. – Work has begun on a 400-car drive-in on a ten-acre plot of ground three blocks east of Highway 85, just north of Eagle Tail airport. The theatre will be operated by Floyd Davis and Nat Jones, local business men. Plans are for a 50x60 foot screen at the north end of the grounds and a two-story combination refreshment center and projection booth. Facilities for expansion to 500 cars will be allowed, the owners said.”

Searching for the site near Springfield turned out to be futile, since it had neither an Eagle Tail airport nor a Highway 85. On the other hand, both were present in Raton NM, where Floyd Davis and Nat Jones opened the 85 Drive-in in June 1949.

A small correction on the date when Baca Theaters (aka Bernard Newman) bought the former Apache.

Boxoffice, Feb. 17, 1964: “Bernie Newman, who operates the Gem Theatre in Walsh, has purchased the Apache Drive-In, Springfield, and the theater is being remodeled prior to being reopend in May”

A July 2022 Google Street View shows a Cobblestone Inn & Suites has been built on the property.