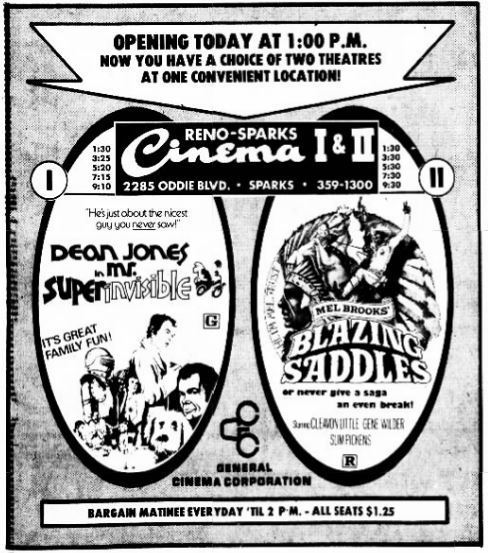 The Sparks Cinema, located on Oddie Boulevard in Sparks, opened onJune 17, 1968 as a single screen house operated by the General Cinema chain. The opening movie was James Garner in “How Sweet It Is”. On June 14, 1974, the theater was twinned and it became part of the the United Artists chain. The theater closed in the late-1990’s, and today houses a church.

When General Cinema was running this it was referred to (at least internally) as Reno-Sparks Cinema.

What fine memories! In the ‘70’s this was the premier Disney showplace! All the Disney films played here first until the 1980’s. Still a strong destination for moviegoers until the mid '80’s when the film started playing second-run double features. The last film I saw here was “Jurassic Park” in late 1993 (Christmas). The place had excellent popcorn, too and was always the cleanest and tidiest theater I have EVER been in.
They used to show the coolest Midnight films in the late 70’s, early '80’s: “Rocky Horror Picture Show”, “Kids are Alright”, “Monty Python and the Holy Grail”, “The Warriors”, “Phantasm”, “Wizards” and others.
The place was well-run (the manager in the '70’s was known to be pretty strict and enforce the uniforms which were rather official looking). Like I said – the place was SPOTLESS.
My best friends ran the theater in the 1987 – 1988 period and it was awesome to visit the projection booth, see old movie posters, hang out afterhours and preview upcoming films. Nothing but great memories here.
Sorry to see it become anything less than what it was, but that’s what happens: multiplexes attract masses and the nicer, older theaters suffer the effect.
Film highlights: “Bambi”, “Snow White”, “Blow Out”, “Arthur”, “Less Than Zero”, “John Carpenter’s Prince of Darkness”, “History of the World Part 1”, “Roxanne”, “Witches of Eastwick”, “Visiting Hours” and too many to mention!

There was a Sparks Theater that opened in March 1947, but apparently was not the one listed above.

The theatre mentioned above, is not the original Sparks Theatre. The original Sparks, was located right across the street from the Nugget Casino. It closed in the late 60’s and was converted into a casino called “The King of Clubs”. It was a single floor theatre, with murals of coal miners on the walls. It was a nice theatre, but even with all the patronage at the casinos, the attendance at the Sparks was closed. I haven’t been in the area lately, but I’m assuming that the theatre was torn down. The theatre listed above, never existed in Sparks when I was there.

correction to the last posting, i meant “attendance at the sparks was weak” before it closed. sorry.

In this listing, it said the theater was a single screen and twinned in the 80’s. It was a twin theater as far as I can remember as far as the ‘70’s are concerned.
The auditoriums were long, sloped tunnel-like with an aisle in the very center all the way to the screen. The seats were painted white and the seat cusions were red vinyl. A blue-ish hue illumnated the screen in between performances. The double doors to each theater had two small windows next to the door handles so you could actually look in and see the movies playing while the doors were closed.
What I’ll never forget was the smell of fresh popcorn. As I said before, the place was kept immaculate – restrooms, the lobby, ect.

Opened with “How sweet it is!. Opened as a twin with on screen 1 with "Mr supervisible” and screen 2 with “Blazing saddles”.