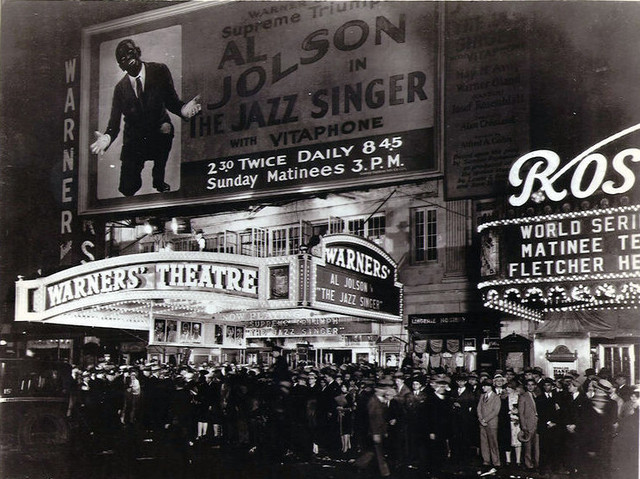 Opened as the Piccadilly Theatre on September 27, 1924, the architects were Newton L. Schloss and Joseph Orlando (associate architects). It was built for Lee Ochs. It was equipped with a Marr & Colton 4 manual 28 ranks organ.

It was taken over by Warner Brothers and re-named the Warners' Theatre on August 29, 1925 with Monte Blue in “The Limited Mail” a Warner Bros. silent movie. It was in this theatre that Warner’s launched their ‘Vitaphone’ talkies and “The Jazz Singer” starring Al Jolson had its Gala World Premiere here on October 6, 1927.

ken mc, the photo you posted on April 17 is actually of the Oriental Theatre in Chicago. Great photo, but wrong page.

OK, I will repost it. I think Life said it was in NYC. Thanks.

I believe this closed as the Republic, not the New Yorker.

Opening ad for “The Jazz Singer”. Notice that ads read “WARNER” and not “WARNERS'” as on the marquee and that the Vitaphone aspect was not played up until much later in the run.

The popular photos of the premier of “The Jazz Singer” featuring Al Jolson and the Warner brothers in front of the theatre were for an invitational sold out live performance by Jolson several days before the movie opened, designed as a publicity stunt. The movie was not shown that night.

On the real premier opening night, not only was Al Jolson not present, neither were the Warner brothers who had gone to California for the funeral of Sam Warner, who had died the day before.

More recent research has shown that not only was opening night not a sensation but that the film did not sell out. It was not even the most popular film of the week in Times Square and acceptance of sound hardly an overnight revolution caused by â€œThe Jazz Singerâ€. Not only had â€œDon Juanâ€ had already played this theatre with sound earlier in the year and done better than â€œThe Jazz Singerâ€, but audiences had already been watching sound newsreels for several years.

The stories that have been repeated since have mostly been fabrications created in later years and fueled by Vitaphone publicity and Warner Bros. multi-picture deal with Al Jolson. â€œThe Jazz Singerâ€ was a mild success in big cities and failed in most smaller markets. The lack of sound theatres (there were only 400 nationwide at the time) made it impossible for it to make much of an impression and the Jewish cantor plot left most audiences outside the larger markets cold. In Boston, for example, the film had to be quickly pulled after a poor opening.

Much of the phenomena repeated today comes from the fictional plot of the movie â€œSinginâ€™ In the Rainâ€. There was no audience hysteria, no Variety headlines, no sound hoopla in the opening ads, no rush to wire theatres, and no rush to train actors to speak. Silent movies continued to be made for several years and were among the most profitable. Sound caught on because Hollywood pushed it on theatres in order to create demand for weak product during the depression, not unlike the way they push 3D today.

Warner Brothers bought the Piccadilly for $835,000 on August 9, 1925 remodeling it and reopening as the Warners Theatre in October of 1925.

The theatre re-opened as Warners on August 29th, 1925, with “The Limited Mail” on screen. For verification, please note the opening day ad that I posted in the Photos Section on January 31st of this year.

There is a trailer on the blu-ray for the movie “The Jazz Singer” that shows the gala world premiere outside the Warners theatre(and possibly the inside too i think?).

It is on YouTube too, albeit with time codes and watermarks…