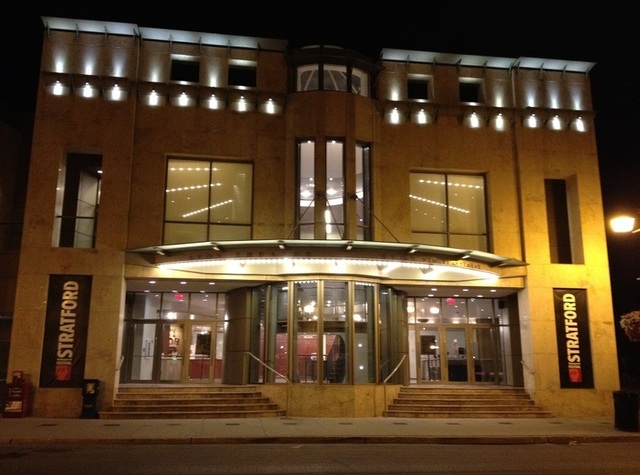 Opened by 1900 as the Opera house. The Theatre Albert opened by 1907 as a venue for live theatrical productions and vaudeville. By 1916 it was operating as the Majestic Theatre. By the 1950’s, it had become a movie theatre. It was acquired in 1963 by the Stratford Festival of Canada. The Avon Theatre has been remodeled twice, first during the early-1960’s, and again in 2002 for the 50th anniversary of the Stratford Festival. Today the Avon Theatre is one of four Stratford area theatres which present Shakespeare and other live theatre.

Here are three pictures of the Avon from 1944 when it was a movie theatre:

The 1924 Stratford City Directory has a listing for the Majestic Theatre (rebuilding) at 97-99 Downie Street. The December 12, 1923, issue of Contract Record and Engineering Review had an item about this rebuilding project, datelined Stratford:

“Partridge Bros., Ontario Street, have the plumbing and heating contract in connection with addition and remodelling ‘Majestic Theatre’ to cost $40,000, owned by A. Brandenberger, Wellington St.”

A. Brandenberger must have been Albert Brandenberger, who is mentioned in several editions of Julius Cahn’s guide as manager of the Opera House in Stratford, with which he was connected at least as early as 1900.

The 1900-1901 and 1910-1911 editions of Cahn’s guide listed the theater the Opera House, but the 1910 edition includes the line “Dates to read Theatre Albert, Stratford.” The house is also called the Theatre Albert in the October 5, 1907, issue of The Billboard, so the names must have been used interchangeably.

Then the 1913-1914 edition of Cahn’s guide lists the theater as Griffin’s Opera House, so Albert Brandenberger must have given up control of the house for a time. Despite the retention of the Opera House appellation, a biography of John Griffin in the 1915 edition of Who’s Who in Canada says that the Griffin Amusement Company ran a chain of movie and vaudeville houses in Ontario, so this house might have been showing movies at least as early as 1913.

The September 2, 1916, issue of The Moving Picture World had this item about the Majestic Theatre in Stratford:

“Toronto, Ont.—Announcement has been made that the Majestic theater at Stratford, Ont., one of the largest and best equipped houses in Western Ontario, has been purchased by Stratford interests from the Canadian Theaters, Limited, which owns a string of theaters in Ontario and Quebec. A. Brandenberger is now the manager of the Majestic.”

It’s possible that the Griffin circuit had changed the name of the theater to Majestic sometime before it was sold to the “Stratford interests”, which presumably included former (and restored) manager Brandenberger.

Stratford: Its Heritage and Its Festival, by Carolynn Bart-Riedstra and Lutzen Riedstra, says that before it became the Majestic the Avon had been called Theatre Albert and was also known as the Griffin Theatre for a while, so there is confirmation that all these earlier reports refer to the same house.