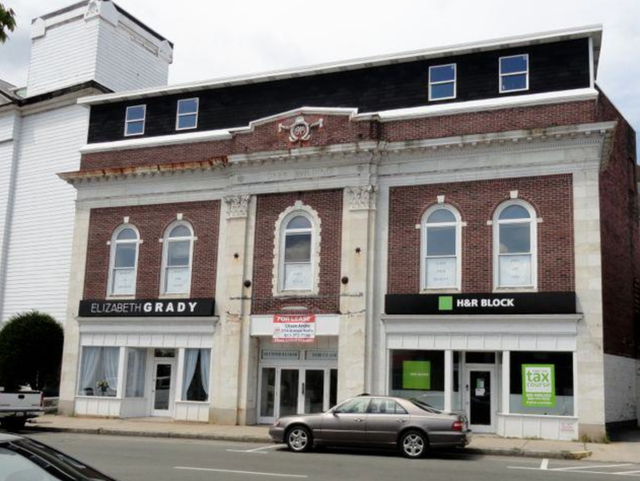 Built in 1917 in a restrained Colonial style, the architect of the Medford Theater was M.A. Dyer. By 1950 the Film Daily Yearbook gave a seating capacity of 1,289. In later years it was twinned and became known as Cinema 1 & 2 and still later, after it was triplexed, the Medford Square 1-2-3. The auditorium portion of the Medford has since been demolished and replacing by parking, but the rest of the building still remains, and is now used for office and retail space.

ken mc’s 1983 photo is definitely the same theater as the April 1941 photo on the MGM Report. In 1941, the store to the left of the theater entrance was a drug store, and to the right was the Bryan Music Co. And to Debbie the Candy Girl, nice to read your memories!

Thanks so much for posting that photo, that black car in the picture parked in front was my grandfather’s car! The tears just started the moment I saw it, thanks again, oh and btw I talked to my mom yesterday after discovering this site. Just FYI the auditorium area of Cinema One was not demolished not on purpose anyway, seems that the contractor at the time hit a main beam in the structure and it actually caved in! Rather than repair or rebuild, they demolished the rest of it and finished it off that way and made way for parking.

Oh! I also wanted to add that in the photo there was a Karate place in the storefront to the right of the Cinema Entrance, but for the longest time that spot was the home on “Heritage Florist”. And Murray Shoes was always there as long as I can remember anyway, I got my prom shoes there every year lol.

To answer Debbie the Candy Girl. I remember you as a young one at the theater as well as your Mom Nancy and I think a Paul. “Bob” had told me of your grandfathers passing shortly after it happened. Sad to report that my grandfather, “Bob” the projectionist passed away on June 8th, 2002 due to a stroke caused by diabetes. After Medford closed he spent his time helping my uncle with his water bed business and worked part time over at the X rated theater in Chelsea. “Dirty Old Man”. Moved up to Leominster, MA in 1998 and remained his old crazy self until he went into a coma 4 days after the stroke. He loved the Medford Cinema and was heart broken when Frank decided to close up shop. Has Frank Andre left us as well, I do recall they were all around the same age. I too have great memories of John. He always had me running across the street to Papa Ginos for coffee, or that little market also across the street for ham & cheese after the Saturday matinee AND even the cleaners to pick up his short-sleeved white shirts. ALWAYS wore those. He was also afraid of bats. I remember I had just finished cleaning Cinema 2 and he yelled up to me to get to the lobby fast. He closed the Cinema 1 and candy counter doors then ran in the office and waited until I shooed the bat out the front doors. Will share more stories if anyone wishes to read them. Steve.

Steve, I’m trying to remember you, how long ago was this? That’s funny though my Grampa was always afraid of bats indeed lol, and we had many occassion when a bat would make it’s way inside since they all came from the steeple of the church that was next door. I’m sorry to hear of Bob’s passing, I had no idea. Frank as far as I know is still with us my mom saw him and his wife Norma a couple of years ago at the Meadow Glen Mall. I would certainly love to share more memories and stories please do post either here or email me at

I too worked at the Medford Cinema when I was a kid many years ago. I was sitting here with Uncle Frank (who is doing great and will be turning 88 in July) googling the Medford Cinema for him to see what came up and found your posts…Hi Deb!!! I did not know about Bob and am very sorry to hear that he passed away…I use to have the best times with Bob up in the booth looking at all his masks and stuff he use to make…Whatever happened to those masks? Uncle Frank said you both did a great job with your stories….Please keep posting as we really enjoy reminiscing…..

In the Street View photo above, the Medford Theatre’s marquee and lobby entrance were in the center of the building facade. As of 1941 at least, there apparently also was a verticle sign above the marquee.

I have been there once many years ago, around 1977-78. They had two small screens up stair and one screen on first floor. Last time I watched the movie “Little Bear in breaking train”(in Cinema 3) while my dad watched “A bridge too far” in cinema 2. It is gone now.

I am looking for photographs of any of the Medford Theaters and especially the Medford drive in theaters that existed years ago and are all no longer. Please contact Ruth at

Nice to see a post of this theatre. My dad and the former owner are cousins…I’d love to connect with anyone who is related!