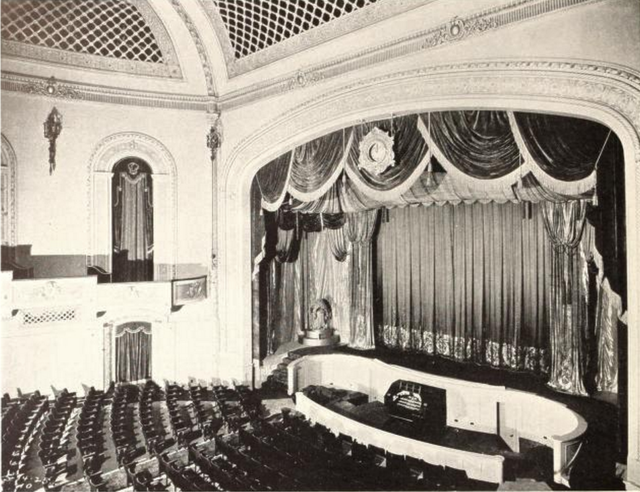 Opened May 18, 1925 with Gloria Swanson in “Madame Sans Gene”. The Boller Brothers were the architects of this 1,600 seat theatre (850 orchestra, 750 balcony). R.E. Hall & Company were the consulting engineers. The Lincoln Theatre was operated by Paramount-Publix. By 1957 it was operated by the Cooper Foundation.

Anyone heard of the Capitol in Lincoln? Do you suppose it was never built? This story is dated 5/3/20:

Lincoln’s New Theater to Be Named the Capitol

Manager Garman announces that the new theater to be built by the Princess Amusement company, operating the Rialto, Liberty, Lyric and Sun theaters will be named after New York City’s magnificent amusement palace, the Capitol. Twenty-five of the principal cities throughout the country are now building beautiful theaters to be named the Capitol and all, including Lincoln, will present the best in motion picture art, music, stage novelties and entertainers. Not one of these theaters will seat less than two thousand, while many in the larger cities will seat over five thousand. Each theater will be equipped with a large stage and dressing rooms and be capable of playing the biggest attractions that tour the country. Work will start on Lincoln’s new theater, the Capitol in about sixty days. The location will be announced shortly.

I’m surprised no one has commented on this, as it appears or appeared to have been quite a place.

Here is an interior photo, circa 1920s:
http://tinyurl.com/pac3ty

Here is an exterior photo from around the same time:
http://tinyurl.com/lost5n

The Lincoln was never converted into a triplex, and was closed in 1961. The May 15 issue of Boxoffice said that Mother’s Day had been the last day of operation for the Lincoln. The site was to be used for an expansion project by a bank.

The Cooper Foundation later built another theater called the Cooper Lincoln in a suburban location, and two multiplexes were built in downtown Lincoln in 1973: a 1,136-seat four-plex called the Cooper Plaza, on the site of the Nebraska Theatre, and an 800-seat three-plex called the Douglas 3, built by Douglas Theatres, which was on the site of the old YMCA at the northeast corner of P and 13th Streets. An earlier 540-seat twin called Cinemas 1&2 was opened downtown by Nebraska Theatres in 1971.

The Capitol theater WAS built in Lincoln, Nebraska (the exterior and interior pictures above are of the Lincoln Theater, at 12th & N, not the Capitol). In its later years, it was operated by Cooper theaters, and was on the north side of O street between 14th & 15th streets, where the Federal Building now sits. It operated as Cooper’s “subrun” house (double features, low prices, after the films had already played Cooper’s prime houses — the Stuart, Lincoln and Nebraska.) The Capitol’s proscenium was far too narrow to accommodate a wide Cinemascope screen and remodelling was out of the question, so Cooper closed it in the early 1950’s.