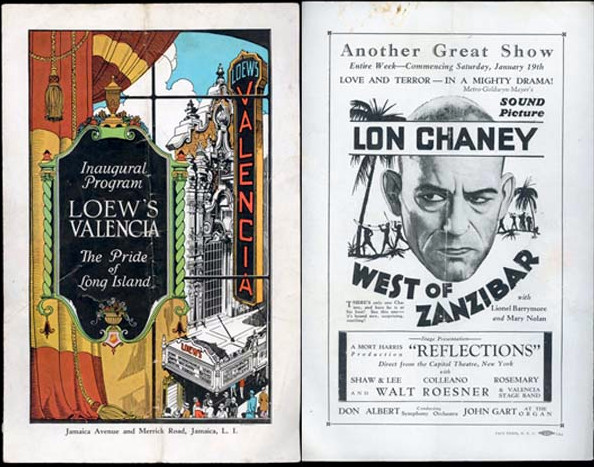 Located in the Jamaica section of Queens. Opened on January 12, 1929 with Monte Blue in “White Shadows in the South Seas” plus vaudeville on stage. The Loew’s Valencia Theatre was the first of the five Loew’s ‘Wonder’ Theatre’s to open. It was equipped with a Robert Morton ‘Wonder’ organ of 4 Manuals / 23 Ranks.

The auditorium is in Atmospheric style, decorated in a mix of Spanish Colonial and pre-Columbian styles. Seating was provided for 3,554 in orchestra and balcony levels.

Early in 1935, stage shows were dropped and replaced by double features. Until the 1960’s, the Loew’s Valencia Theatre was the most successful movie theatre in Queens, due partly to its location in Jamaica, then the shopping hub of Queens and Long Island, and because programs were shown at least a week ahead of all other theatres in the borough. It closed as a movie theatre May 26, 1977 with the movie “The Greatest” starring Ernest Borgnine, and has since served as the Tabernacle of Prayer for All People church.

The Robert Morton ‘Wonder’ organ has found a new home in the Balbao Theatre, San Diego, California, where in 2008 it was installed and refurbished at a cost of $1 million. It debuted at the Balbao Theatre in February 2009.

The Loew’s Valencia Theatre was placed on the National Register of Historic Places in 1999.

I know this is late notice, but tonight, April 7th, at 8:30, WNYE-TV channel 25 will be airing an episode of their Blueprint NYC series devoted to the Loew’s Wonder Theaters. If you miss it, you may be able to watch the episode at their website after it has aired.

Color photo from the balcony uploaded.

For amazing color photos of the Valencia go to ScoutingNY.com

They also did a tour, sorry I missed it. In looking at the photo’s it looks like the original projection windows have been covered up and there is an air conditioner in one of them. I wonder what the former projection room is used for currently by the church?

Can anyone tell me if the chandelier shown in the Gothamist photo set is original to the auditorium? I’ve never seen an atmospheric design with a chandelier hanging from the “sky” before.

There is no chandelier in any of the 1929 photos of the auditorium.

Simply put: the chandelier was an addition by the church.

Great pictorial and history of this gem. https://tilesinnewyork.blogspot.com/2014/02/movie-palaces-part-1-loews-valencia.html

This was one of the first movie palaces I remember going to when I was a kid. I’ve been back many times, first sneaking in to church services, and then on tours given by the church. I love the place, but hopefully they’ll repaint the lobby one day (yuck.)