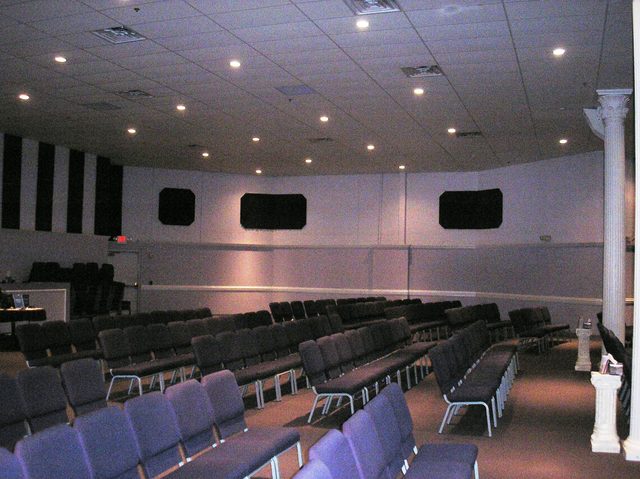 The Cinema North opened in June of 1976 and was the twin to the Cinema South that opened on the same day. It opened as a four screen by Consolidated Theatres. It was remodeled in 1982 and two more screens were added. Carmike took over operations in 1989 and operated it until closed in August of 2000.

I remember when the Cinema North and South opened both quads at the time and looked just alike as far as I can remember.The Cinema South on Nolensville Road closed and was a night club for a while,which closed and was torn down,a food store is at the site now.

I just noticed the header on this site is wrong the Cinema South was on Nolensville Road and the Cinema North was on Two Mile Parkway in Goodletsville.

Cinema North was at 705 Two Mile Pike, Cinema South was at 3760 Nolensville Rd. They were the first multiplexes built as such in Nashville. Oh, and auditorium 1 at the South was the same size as auditorium at the North. All four auditoriums had nice sized screens. The South’s sound systems were all mono, never any upgrades. When the North added on two screens, Consolidated updated the sound systems, somewhat…. the largest auditorium had full stereo, all the others had ‘pseudo-stereo’… a system that took a mono track and created a stereo effect, but never had true channel separation. Better than mono, though.

Thanks GMNash,we has a projectionist at the Loews Crescent who was also the Asst. Manager at this theatre went it first opened.His name was Richard,do not remember his last name,he also was flew planes.Maybe you knew him.?

I began working for Consolidated in 1979 at the Bell Rd 4-5-6, so really didn’t know any employees of the chains before that. I grew up in Columbia, and worked at the Polk, later twinned as the Polk Cinema 1 & 2, and the Sundown Drive-In. Would love to chat sometime with you about the theatre days here in Nashville and the area. Maybe there are a few others around that would like to get together and compare notes.

Sure that happens all the time on this site,click on any of the blue screens to link to another site.

I believe that Consolidated started the dollar matinees in Nashville when the Cinema North and Cinema South opened, and of course Martin had to match those prices. That was great for us poor college students! I really liked this theatre design with the large screens. There were at least 4 built with this design (Nashville – 2, Knoxville, and Huntsville AL. I’m sure there were more.

The Julia 4 in Columbia, SC is another I believe.

As far as Consolidated Theatres goes — was this chain absorbed by another? Was it an earlier name for another? What’s their deal?

I worked at Cinema North 1983-1988 as an usher, concessions, box-office… then assistant mgr and projectionists. I transferred to Cinema South in 1988 as manager. I think GMNash was the manager at Cinema South before me? Then I was transferred to Belcourt when Carmike purchased Consolidated in 1989 or 1990? I worked at Belcourt for about 18 months before I retired. I hated the hours at Belcourt… Cinema North and South were open for matinees all year so the manager hours were mostly normal daytime hours… generally 11am-6pm Mon-Friday and a couple of shifts on the weekends. Belcourt was only open for Matinees during the summer. So the manager hours were almost all Night hours 5pm-Midnight + weekends and we still had to keep some day-time hours to take care of banking, deliveries, etc. Impossible to have a real life outside of work. It ended up being a lot more hours for less pay (they paid by the number of screens and small commission on concession sales). Then I was robbed at gunpoint twice within 6 months. No thanks! I moved on to a safer day-time job with better pay and benefits. But it was a fun job most of the time.