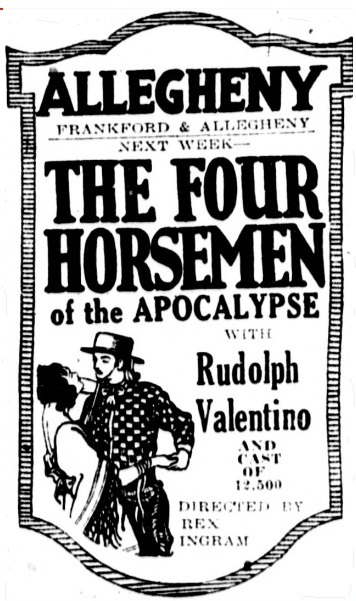 The Allegheny Theatre opened in 1912 and was originally designed by the firm of Magaziner & Potter. It was remodeled in 1926 by the firm of Hoffman-Henon Co. The theatre was part of Warner Bros. Circuit Management Corp. by 1941. The theatre, which stood on Frankford Avenue, lasted until 1956 and has since been torn down.

AFY Yearbook lists this as 2,858 in 1936. Numbers above should be changed. The other Allegheny theatre did not go by that name in 1936.

In the 1941 Philadelphia yellow pages, the Allegheny Theater was listed at 3141 Frankford Avenue.

Here is an architectural sketch from the PAB site:
http://tinyurl.com/ysqrhw

PHILADELPHIA-Six Philadelphia motion picture theaters have added vaudeville to their programs with indications that other houses in this area will follow suit, in an attempt to pep up the slump in business.

One theater-the North Philadelphia Nixon-Grand-has discontinued stage shows and added instead six game nights in addition to double features. Harry Slatko, manager, is featuring the biggest giveaway attraction in the city-$2,500 each week-with a ten and fifteen cent admission.

A dollar store (Family Dollar) and a furniture warehouse now share the site.