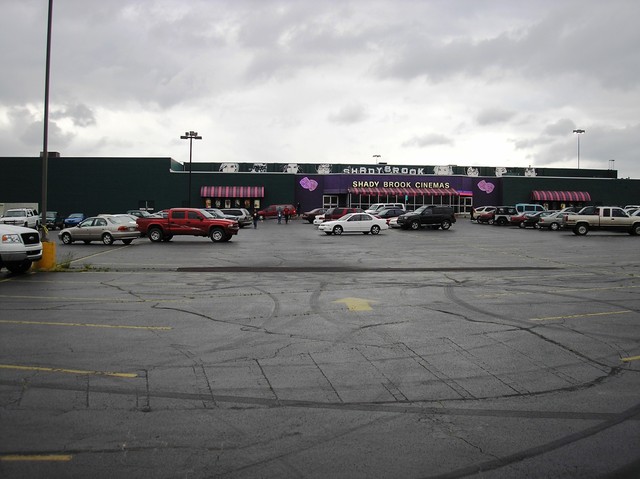 It was a four screen when it opened. The Shady Brook Cinema went through remodels in 1988 converting to six screens then in 1992 it went to ten screens. Today it features twelve modern auditoriums with Dolby sound and high back rocker chairs. It was announced on November 30, 2020 that the family run cinemas would close on December 31, 2020.

We just wanted to say that we went to see The Aviator last night (New Years Eve) and could not believe how you put a 5-star movie in the smallest theater any of us had ever seen. It was stuffy and tight in there and the screen was too close even if you sat in the back as small as it was in there! That particular movie should have been put in one of the bigger auditoriums! EVERYONE in there was upset and mouthing. I know I am probably the only one that took the iniative to write in about it. It seems that they need to prioritize the movies a little better. There is no earthly reason the Lemony Snicketts (?) and Christmas with the Kranks should take up 2 of the bigger screens. Kids have good eyes and better joints to sit in the smaller theaters. A movie about Howard Hughes should have been in the bigger theater and everyone else thought so too! Come on, management, start putting some thought into which theater gets the bigger room OR build on!

All of us wanted to comment on how clean the auditorium was that “Aviator” was showing in on 1/22/05. We went to the last showing and were amazed at how clean it was. The concession employee upsold to a Large Drink and Popcorn, the usher made an announcement before the movie explaining different specials going on in the upcoming months and he also explained where the emergency exits were. I am from out of town and was visiting friends and was very pleased with this theatre and the employees were very curtious. The main thing that surprised me was the cleanliness, and there were no old popcorn cups laying on the floor. Very clean and very nice people working. Great job management.

Thanks for having a CLEAN and FRIENDLY theater! All the staff we came in contact with talked to us and offered us more deals and discounts. It was such a breath of fresh air to see your theater. I will surely tell my friends and family about your theater. Congrats on a job well done.

Lost Memory, There is only one Shady Brook Cinema. The access is from Shady Brook Street only.

Is there any way to talk to a person at this (or any) movie theater anymore? I’m trying to find out if they will be showing Harry Potter 7.1 before the opening of Harry Potter 7.2