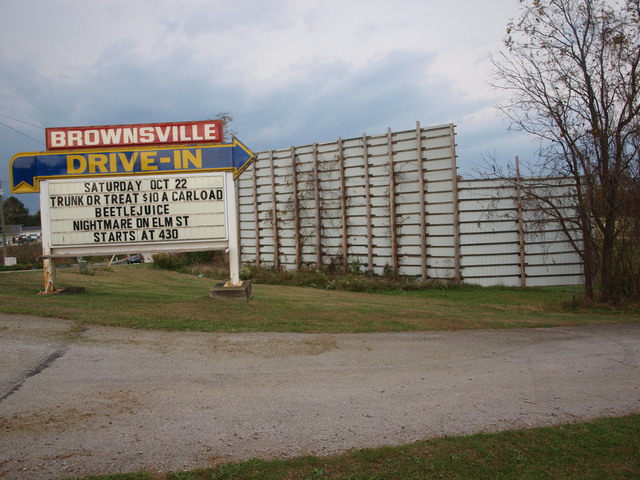 Located along Route 40 between Grindstone and Uniontown. A three-screener running mostly first-run twin bills. In operation since opening on April 26, 1949, it began as Fick’s Drive-In started by Izzie Ficks who had not only the drive-in but a restaurant, motel and bowling alley across the highway. As a single screen drive-in, Fick’s Drive-In had a capacity for 400 cars. By 1955 it was operated by Basle and Laskey Entr. and F.D. Moore Theatre Services. On March 26, 1959 it was renamed Brownsville Drive-In.

Purchased in the 1970’s or thereabouts and during the first outdoor shakeout, began running adult fare. Twin screened in the 1980’s and tripled in the 1990’s. Turned back to family fare in the mid 1980’s. Does bangup business during the summer months.

Despite recent construction of a connector for the PA 43 Turnpike route as well as a new stretch of U.S. 40, this thankfully has not affected the drive-in as far as location, although said bowling alley (Gudac Lanes) and other buildings across the way were razed.

The new U.S. 40 connector runs east of the drive-in to the intersection (where an overpass once stood) near JCT PA 166. The Brownsville can be clearly seen from this new road. The old U.S. 40 segment of National Rd. where the drive-in stands has been renamed Business U.S. 40.

Added some pictures from the Brownsville Drive-In Facebook page.

Ficks opened in April 1949. Its ad in the April 22, 1949 Uniontown Morning Herald said to “watch for opening of the district’s newest most modern constructed drive-in”. Its first now showing ad was Tuesday April 26, “One Sunday Afternoon”. For some reason, the current Brownsville site says the original box office was erected in June 1949.

The Daily Courier of Connellsville wrote on July 3, 1951: I. J. Ficks and Margaret B. A. Moody were deeded nine and a half acres of ground with buildings along Route 40 by the Ficks Drive-In Theatre, Inc. That would be Isadore J. Ficks.

In March 1954, I. J. Ficks announced purchase of the Moody interests in the Ficks Drive-In theater.

The Brownsville, formerly Ficks, reopened for the season in March 1959, now owned by Louis Stuler and Durward Coe, the pair who started the Sky View a few miles down the road in Carmichaels.

Ficks is listed under Brownsville in the 1952-59 Motion Picture Almanacs, capacity 400, owned by Moody & Dickinson. For the 1961-66 editions, it became the Brownsville DI, owned by Louis Stuler & Darwin Coe. It fell off the MPA list in 1978, never to return.

The 1993 photo at HistoricAerials.com shows only two screens, so the third must have come after that. The 1969 photo shows that the main screen used to be northwest of the concession stand.

Ficks was renamed Brownsville on March 26, 1959