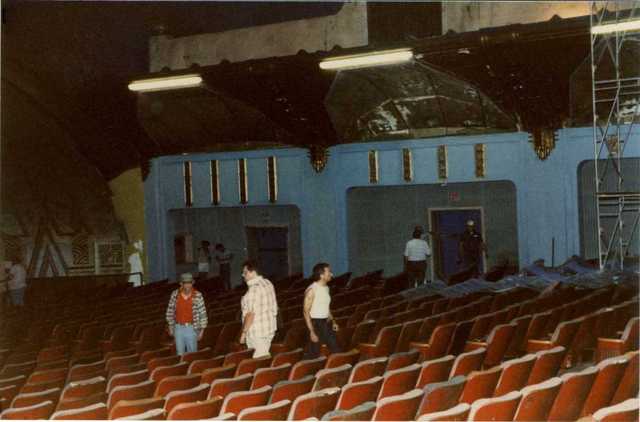 The Erlen Theatre opened on November 14, 1930 with Metropolitan Opera star Frances Alda singing from the stage on opening night. A photo of the exterior with grand opening style decorations appears in the 1971 (3rd Quarter) Marquee publication of the Theatre Historical Society of America with Richard Arlen in “Santa Fe Trail” - ‘Kiddie Shows Sat’ on the marquee. Opening prices ranged from 10 to 15 cents for weekday matinees, to 20 to 35 cents for Saturday and holiday evenings.

The Erlen Theatre was designed by Philadelphia architects William H. Lee and Armand de Cortieaux Carroll. The name ‘Erlen’ was derived from parts of the last names of developers Charles G. Erny and James A. Nolen. A preliminary sketch of the Erlen Theatre’s facade looks very different from what was actually constructed, and is found on page 12 of Volume Two of the book “American Theatres of Today” (1930). The foyer was decorated with red leather, shiny metal moldings, black columns and silver carved mirrors. The 125 foot wide auditorium had 1,700 seats. The auditorium was in the form of a huge arch that was cove lit to give it the effect of a midnight sky. The Erlen Theatre was built for local movie operators Sablosky brothers, who the next month opened another Lee designed Art Deco semi-Atmospheric style movie palace, the Norris Theatre in Norristown, PA. With the Midway Theatre, the Erlen Theatre was one of the last large single screen theatres built in Philadelphia.

The initial operation was second run neighborhood showing of movies, and that policy continued through the 1970’s. Unfortunately, despite considerable litigation, the Erlen Theatre was unable to book first run films because of opposition from operators of movie theatres in downtown Philadelphia. By 1981, local theatre operator Ellis Theatres was showing movies here. In 1984, Ellis Theatres sold the Erlen Theatre to a church. In a 1985 Philadelphia Inquirer article discussing the possible sale of the theatre to become a Christian Cinema, the color of the interior was then described as royal blue. By 1994, the Erlen Theatre was for sale. In 2002, the theatre was auctioned off by the City for nonpayment of taxes, and for only $800 was acquired by the City. The City demolished the Erlen Theatre in 2002.

I dimly remember the auditorium had something like the “sunrise” effect proscenium similar to Radio City. In 1960, it was one of the few theatres locally to show a 35mm print of “80 Days” after its downtown roadshow run.

I saw a lot of movies for free especially at the Renel, Erlen, Esquire but only the last half hour. In my youth (late 50’s) the doors would be opened near the end of the film for people to leave and of course there would be no one there to ask for a ticket. I constructed the earlier part of each film from my imagination.
Saturday afternoon matinee for kids at the Renel was sheer madness.
20 cartoons plus yo-yo contest and then a quality flick like Superman Meets the Mole Men.

Saturday May 6,1961 this theatre featured “BEN HUR” in its roadshow format. 2 shows daily 1:30 & 8pm. YES Moshe your right. The BEST matinees for kids was the Renel. Cartoons, 2 reelers, serials and a double feature. Life was GREAT> rg

For a tremendous trip down memory lane all you old movie theater fans must read the hilarious short story called “Leopold Doppler and the Great Orpheum Gravy Boat Riot” by the legendary Jean Shepherd from his book “In God We Trust-(All Others Pay Cash)”. Available at Amazon.

I browse this site once in a blue moon and was SO VERY saddened to hear of the Erlen’s demise. Born in 1935 I grew up at the movies in the Erlen, Renel, Lane, Yorktown and Keswick…all reachable by trolley and/or bus during the war years of WWII. What a time that was! The films were glorious and the theaters were also. My favorite was the Erlen. It was the only “atmospheric” in Philly I ever saw. It was GORGEOUS…with faux Spanish style garden on a small roof that stuck out about six feet along the sides of the auditorium. Yes…the proscenium was VERY much like Radio City Music Hall….beautiful gold leaf sunburst framing the stage. They had a VERY attractive and art deco modern waiting room with comfortable chairs. It was a glorious theater. I live in Connecticut now…and have seen the demise EVERYWHERE of the great palaces of the past. Thank God that the Friends of the Boyd apparently have saved it. NO NYC center city Broadway theater exists from the golden age, except Radio City which is not strictly speaking a movie theater today. SOOOOOOOOOO sad…..

Here in Connecticut many of the great palaces and atmospherics like the Erlen…HAVE been saved…..like the Keswick was…..by turning them into legitimate theaters. As the sun seems to be setting on movies because of the poor prints, lousy projection, end of continuous showings, no short subjects, cartoons or ANY sense of LIFE and community….theater seems to be booming. The 3,000 Palace in Waterbury, CT, which, like the Erlen, was closed for decades and rotting away, roof collapsing, etc….was restored last year TOTALLY….and today is a SMASH with touring Broadway shows, concerts, ballet, singing groups. WHY was a MAGNIFCENT theater like the Erlen allowed to die?

Philadelphians for many years….most of my life…..had NO appreciation for theaters and even as other cities began to save them, renovate them, and use them…Phildelphians just let them rot until they were torn down. To have lost the Keith/Randolph, the Fox, the Stanley, Stanton, Arcadia, Aldine, and Karlton/Midtown as well as the Goldman is just heartbreaking. And the MASTBAUM…operated for awhile by Roxy Rothafel himself….the loss of that INCREDIBLE structure was a CRTME.

My mother used to say that the rich in Philadelphia…those on the Main Line….and elsewhere….were the least supportive people in America of the arts. Yes…yes…the Art Museum….but WHAT ELSE from the golden age survives besides that and the Academy of Music. The GORGEOUS Erlanger legitimate theater is gone….as is the Locust. How sad….when other cities preserved their heritage by adapting it to new forms.

Looking for photos of this theater. Thanks rg E-mail

A friend emailed me the following:
“I took a trip there after most but not all of the demolition was completed. There was still a frame of iron girders around the proscenium arch….I went there late at night, and walked out to where the orchestra pit should have been.”

(That really was from a friend. I never saw the theater).

Boy, am I an idiot…lived in Olney for a time, went to the Erlen and never realized that Erlen is an anagram for Renel.