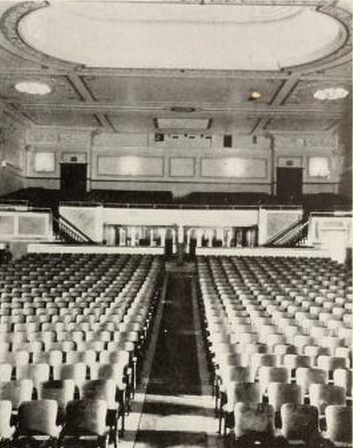 Opened April 8, 1926, the architectural firm of H.C. Hodgens & A.D. Hill are given as architects of this stadium type theatre (with no overhanging balcony).

The Cathaum’s building is still there (only one building down from the newly renovated State – which you should check out if in town, live shows and independant/foreign/b movies) now housing a clothing store, drug store, Players(although players has changed its name as that term has gone a bit out of style) and I think the university still uses part as an annex. Not sure what happened to the nittany, though if it was before Calder it may be a number of different things, there’s a clothing store and bank it could be, if it’s closer to Beaver then it has probably been replaced as the larger buildings are all newer.

The building that once held the Cathaum is now largely occupied by a CVS on the ground floor. I believe that the nightclub Indigo is now on the top floor where Players used to be (correct me if I’m wrong).

I went to Penn State in 1957-1958 and remember the Cathuam. Does anyone know when it closed?

Linkrot repair: The twice previously-linked page with the 1930s photo of the Cathaum Theatre is now at this URL, but it’s anybody’s guess for how long. The photo is a bit less than halfway down the very long page.

This web page has an article about the Cathaum Theatre first published in The Collegian in 1996. It says that the theater opened on April 8, 1926.

The Baums must have had a hard time getting this project underway. The Cathaum is mentioned by name in construction trade journals as early as 1922, when it was in the planning stage, but at that time it was being designed by a different architect, Harry S. Bair of Pittsburgh. The firm of Hodgens & Hill was formed in 1923, so they had to have taken over the project after that.

It was owned and operated by Maurice Baum from 1928, and seated less than one thousand when it opened that year.

I remember seeing several films there as a child. It was a rather grand but very dark theater from what I remember. It was closed in the mid 70’s and was split in half. The upper level become a nightclub called “Gatsby’s” and the lower became a disco called “Mr C’s”. I performed in a dinner theater production there in the late 80’s and the proscenium arch, ceiling and most of the upper architecture was still intact and looked very nice. It was then converted shortly after into additional cubicle office space for Penn State’s English department.

According to my research the Cathaum closed during the week of May 26, 1976 through June 1, 1976. The last film that I have seen playing there was “The Duchess and the Dirtwater Fox” with Goldie Hawn and George Segal.