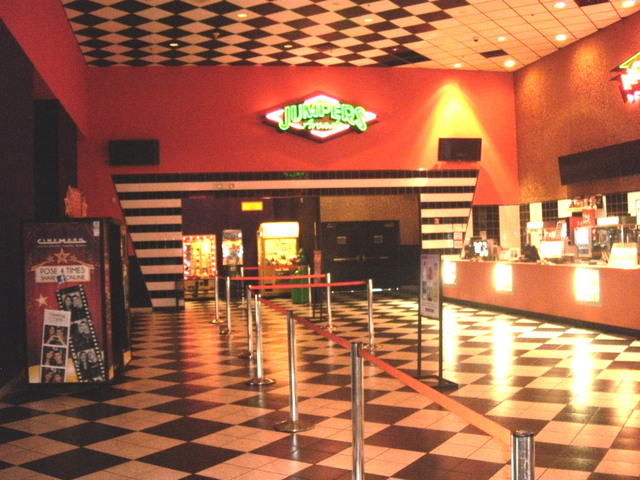 Opened March 21, 1997, this Cinemark theatre was housed in a large free standing building. The exterior was a rough surfaced concrete block building with a cream color along the top and dark drey with indented cream stipes along the bottom of the building.

There was a large outer lobby with three box offices. The lobby itself and the box offices were done in a black and white check. The floors of the lobby including the rest rooms and parts fo the ceiling were done in this checkered pattern giving a large airy feeling to the building.

The main concession area has six stations and their were two satelite concession stands.

The auditoriums were all stadium seating for great vision lines. The walls of the auditoriums had old fashionded Art Deco light fixtures on each side. Parts of the walls in the lobby and in the hallways leading to the theatres were done in a dark red with neon lighting along the ceilings.

The theatre was large spacious and very comfortable for a great movie atmosphere. It was closed March 31, 2017 and demolished in May 2017.

http://www.cinematour.com/tour.php?db=us&id=4660 This is one of the most hideous, garish theaters i’ve ever had the displeasure to see photos of.

For twenty years, the Six Flags Mall had an external twin-screen turned five-screen General Cinema Theater that competed with the nearby AMC Forum 6 at the same-era Forum 303 Mall. As Arlington grew, theaters sprouted up everywhere: Loews opened the Lincoln Square to the North, UA launched the Bowen to the southwest, AMC built its Green Oaks 8 to the southwest, and General Cinema would open an eight screener to the southwest. As the 1980s concluded, Six Flags Mall was being challenged by the new Parks Mall in Arlington just to the Southwest and had to take action.

The economic tides were turning as Interstate 20 was helping to create a retail nexus in south Arlington entering the 1990s. Six Flags had a major expansion and remodel in 1990 to compete against the Parks. Unfortunately, the veteran General Cinema Six Flags left as the remodel was happening, As more theaters came online including two in Grand Prairie to the southeast, Cinemark stepped in and announced a theater in 1996 which would open in March 28, 1997. The 45,000-square-foot addition to the shopping center would be christened as the Cinemark Tinseltown USA Six Flags Mall 9.

Opening with Selena, Jerry Maguire; Return of the Jedi; Liar, Liar; Jungle 2 Jungle; Donnie Brasco; and The English Patient, the theater boosted optimism for the twenty year old mall. In terms of moviegoing, AMC would leave the Forum which was a shot in the arm to the Tinseltown. When AMC announced a megaplex to be added to the interior of the Parks Mall, Six Flags Mall countered with a $25 million expansion plan including skating rink, free-standing restaurants and expansion of Six Flags’ Cinemark from 9 to 14 screens with an additional 18,639 square fee added.

But Six Flags Mall would go into a nosedive along with the neighboring former Forum turned Festival Mall. Six Flags shedded stores then anchors heading toward greyfield status – a term akin to a dead mall. Tinseltown’s expansion from 9 to 14 screens was featured on the mall directory but never became reality nor did the other promised changes. Penney’s, Foley’s, Sears, and Dillards – the primary four anchors – all left with Dillards returning with a low-priced outlet store. The Festival would be closed in May of 2005 which may have prolonged the agony facing the Six Flags Mall. Attempts to revive the Penney’s anchor met with failure and the mall flailed. Yet, despite Six Flags obvious-to-all forthcoming demise, Cinemark just kept drawing huge crowds in the ghost town mall.

As the 2010s opened, Six Flags Mall was toast. The air conditioning failed and all of the stores in the middle were closed and access was only allowed to the food court, cinema, and Dillards anchor. In December of 2012, Six Flags Mall was sold to Noble Crest which renamed the mall, “Plaza Central,” a lackluster effort to convert the space to a vibrant Hispanic mall. As of the mid-2010s, the mall had reopened but was a surreal shopping experience in which anyone could walk through the closed stores and make a deal to launch a store at a bargain leasing rate. Using low-cost first-run pricing, Cinemark shrugged off the disaster that was the Six Flags Mall / Plaza Central in its infancy and continued to pack in crowds. An odd success in a wildly unsuccessful shopping center. And as of 2015, the circuit still hadn’t acknowledged the Six Flags Mall name change to Plaza Central as the new mall owners struggled mightily to create an inviting shopping experience.

Cinemark announced the closure of the property ending a 20-year lease as of March 30, 2017 with the last features playing: Beauty & the Beast, Kong: Skull Island, Logan, The Belko Experiment, Lego: Batman, and what they will say at the last show, “Get Out.” Two problems in continuing operations were that 1) when the Six Flags Mall was being torn down around it, two separate fire incidents didn’t exactly inspire confidence and 2) when the final plans were revealed for the former mall location, it was as industrial complex which isn’t a good match for a theater. The theatre encouraged guests to travel to their theaters south-ward in Grand Prairie or northward in Hurst.

This Cinemark Theatre was added to the Northwest portion of the Six Flags Mall in 1997 and connected to the mall’s food court. It was not a free standing building; though it was the last business in the renamed Plaza Central mall making it to the end of its 20-year lease as the remainder of the mall was being demolished. The Tinseltown was demolished soon after closing in 2017.