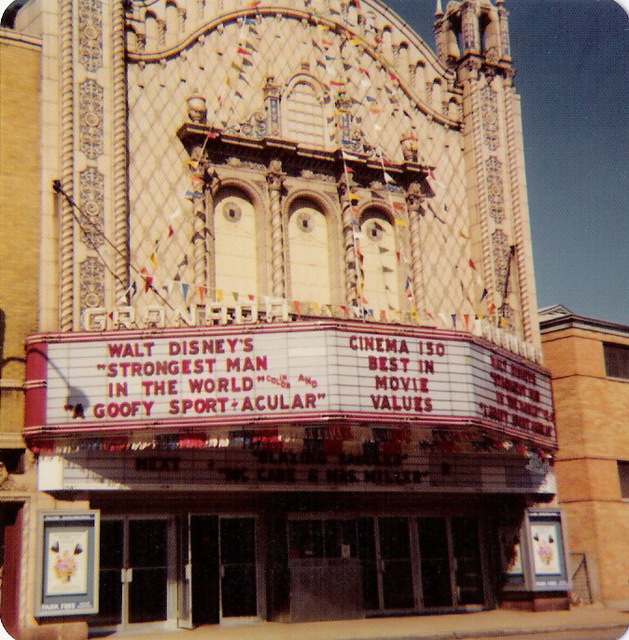 The Granada Theatre opened on September 29, 1927 with Ronald Colman in “Beau Geste”. It was a neighborhood theatre located in the Bevo area of St. Louis. The theatre was designed in the Spanish Baroque style and featured a beautiful overhanging balcony.

It originally seated 1,585 combined on the main level and balcony. Much of its decor was considered too ornate for just a neighborhood theatre.

Operated by the Arthur Brothers/St. Louis Amusement Co. Chain. It mostly ran 2nd run movies until the demise of the Arthur Theatre Chain.

Located in a densely populated neighborhood, locals were faithful to the theatre until it closed June 19, 1986 with “Gung Ho”. Part of the roof and back wall over the stage gave way over night during a storm and the cost of repairs was too high so the theatre was razed in December 1992 despite efforts to save it.

I was born in St. Lou and grew up over by my grandparents house on Juniata St and Gustine Ave. I remember seeing Nightmare on Elmstreet w/my dad and uncle and sister and being scared to death walking home, because every alley we would pass by my uncle would yell “THERE’S FREDDY!!!!!” Also saw Airplane. Hated that the theater couldn’t be saved.

I remember coming to the Granada to see Back to the Future and the film kept busting and they had to restart it. Also saw my first R rated film there as well Porky’s. My parents took me I think I was 9 years old. They must have thought it was about that Looney Tunes character.

According to this item from the September 23, 1927, issue of The Film Daily, the Granada Theatre was built by the Skouras Borthers and Harry Koplar:

“St. Louis — The Granada is the name selected for the theater at Gravois and Ellenwood Sts. which will be opened by the St. Louis Amusement Co. in a few weeks. The new house will seat about 2000 and will be among the largest of the outlying theaters operated by Skouras Bros, and Harry Koplar. It is planned to use this house for subsequent runs getting pictures immediately after the Missouri and Ambassador.”Warner Bros. took over Skouras Brothers Enterprises in 1928. I don’t know when the Arthurs took over the Saint Louis Amusement Company.

In a recent book, I read that Ginger Rogers lived above the Grenada in its early years, prior to teaming up with Fred Astaire. JDH

This is a dedication to our loving father whom was called home by out heavenly father on November 11, 2013.

Our great grandmother managed theatres in St. Louis so theatre was in dad’s blood. Then while in high school he was in the DECCA program his Junior and Senior years and went to school a half day and worked at the Loew’s State in Downtown St. Louis. Dad loved the movie theatres and started researching them early in his life. He was most fond of the Loew’s State. Mr. Bovin was the City Manager for Loew’s in St. Louis. The two built a special bind. Others there were Nick Manzella the manage and John Muich the assistant manager. Dad wanted to be a pilot above all things though. He did his college and then his flight school, met our mother in college. Through pulling some string by people that could dad was able to get a job with TWA. His life was happy, a beautiful career and a wonderful loving wife. They had three children, Stephen Philip, Christopher Charles and Zachary Benjamin. Mon developed cancer while carrying Zachary and passed away three months after Zachary was born. It was very difficult for all three of us boys but it was extremely hard on dad. He had to do local flights so that he could be home with us as much as possible. We must say we had the greatest dad the heavenly father could put on this earth. As we got older dad was able to work international flights. When we were not in school we would make as many trips with him as possible. Dad joined an online site called Cinema Treasures and it worked out great for him. When he had layovers in his destination cities he would research theatres. Dad joined Cinema Treasures not very long after it went live inline. He joined on October 6, 2003 and over the years has contributed more than 5,000 theatres, 14,000 comments and almost 4,000 photos to the site. Dad lived for his sons first, flying second and the theatres were his one and only hobby. He made some special friends on Cinema Treasures, Patsy from down south, Ken from New York,, Randy Carlisle the great photographer from Texas, Don Lewis from the Dallas Fort Worth area (Don is also a airline worker with Southwest) but they all are contributors to Cinema Treasures. There is also Ken Roe from the United Kingdom who was a wonderful friend to dad. Out Mom was born and raised in the UK. Being a pilot dad had his favorites to fly to. His number one spot was Hawaii. That is where mom and dad were buried. They are there is spirit and we well be able to feel that spirit when we go over there. Mom and Dad had their condo new Honolulu on the ocean and he spent the mainland cold months in HI. We have family and friends in St. Louis, Salt Lake City and of course Hawaii so we had to have services at all three places before dad was finally buried. Dad got me started on Cinema Treasure but I don’t know if I will ever be able to fill his shoes. But I will try. Mahalo to all those that have helped me so far, especially Joe Vogel and Ken. Ken I can’t count the times that when we were around dad and he would read your comments and just bust out laughing. You touched his heart in so many way. I know there are many others but those mentioned in this dedication are the one that dad talked about most of the time. His love through my spirit goes out to you all. You are all treasures in so many ways and thru a treasure that your friendships came to fruitation “Cinema Treasures” Mahalo to you all. Dad really fought a tough battle but his body was so weak from the first tumor that he didn’t have the physical strength to beat it this time. I tried to be there for him as much as possible and sometimes I felt like I wasn’t there enough. Being the firstborn there was a special bind between the two of us. I still feel the flow involuntarily when I go through his theatre research, when I see something that was special to him, his photos. Time will help I know. And since we were all sealed together in the Temple I know we will all be together again one day.

As the Granada was being tore down I spent several weeks taking snapshots of the progress. I rescued the Aisle 3 Plexiglas sign from inside the theatre. During the 1980’s the STLTOS had plans of installing a theatre pipe organ in the chambers that had never been occupied. On the stage there was still a Shulz grand piano on its side.

The description says “it mostly ran first-run movies.” It was not until 1968 the Granada had a f-r film, and that was a multiple-theatre run. The Granada was a second-run house until that time. An exceptional house, to be sure, when first opened it was the equivalent of a “try-out” house with successful stage acts moving down to the Skouras Brothers' prime house, the Ambassador.

If anyone is interested in checking out photos of the salvage process, Larry Giles of the National Building Arts Center has uploaded them onto his new website here:

I grew up going to the Granada. My siblings and I went there a lot. My grandfather, Charles Reilly, was the stagehand at the Granada, probably since it first opened. My Dad told me that they didn’t suffer too much due to the depression because folks could always scrounge up a nickle or dime to go to the movies to forget their troubles, so Grandpa always had a job. There were quite a few photos of him taken by the Post-Dispatch or the Globe-Democrat over the years. Usually of him up on a high ladder changing the marquee outside – sometimes during a blizzard. (the show must go on, you know!) He did most everything behind the curtain you can think of – he could fix or build anything. Speaking of the curtain, sometimes he let us go with him backstage before anyone would be in the house before a movie. It was so different, it was not as magical as the front of the house. Stacked lumber, ropes controlling the curtains, tool boxes, movie sign boards either coming from or going to the lobby, boxes of large light bulbs, and so much other stuff. He wore a suit, tie, and fedora to work everyday and would take off his suit coat and put on a pair of overalls to wear while working. Pretty dapper, overalls, long sleeve shirt, and tie. He worked there until they said he had to retire because he turned 65. He found out they hired two guys to take his place. I guess I had a magical childhood, one grandpa worked at the Granada, so we saw all the kid movies and the other delivered ice cream for Meadow Gold Dairy, we always got samples of the new ice cream treats. What more could a kid ask for? The Granada was beautiful and I will always remember it. I’m sorry to hear it’s been torn down. I haven’t lived in St. Louis for 50 years, so much has changed…and not always for the good.