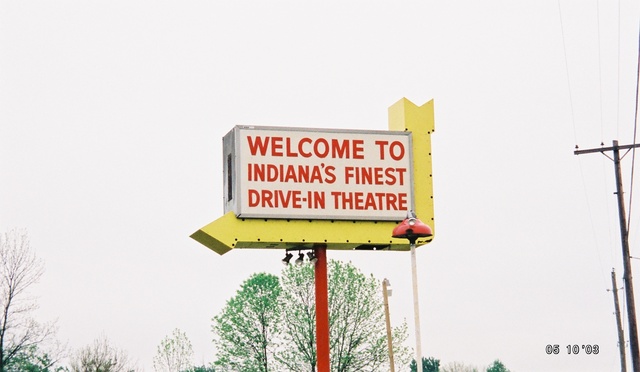 The Clermont Deluxe Drive-In opened May 12, 1950 with Yvonne De Carlo in “Calamity Jane and Sam Bass” & Lex Barker in “Tarzan’s Magic Fountain”. It closed in July 2007. It had a capacity for 735 cars.

from the june 13th edition of the Indianapolis Star

Racing businessman Bill Simpson’s request to rezone the Clermont Deluxe Drive-In Theatre property received a favorable recommendation Tuesday by the Hendricks County Area Plan Commission.
Simpson wants to rezone the 20 acres, located on U.S. 136 across from O'Reilly Raceway Park, and replace the six-decade-old, two-screen theater with a race-related commercial and warehouse business park.
County commissioners will have the final say during their regular meeting June 26.
The Clermont Deluxe has survived while many other Indianapolis drive-in theaters closed. If the Clermont theater is shut down, only the Tibbs drive-in theater on the Westside would be left.

It’s official, after labor day 2007, the Deluxe will close forever.
The operator of the theater will be able to salvage as much of the
equipment as possible. He hopes to open in a new location in 2008

Here is a photo from around the closing. The theater website is defunct.
http://tinyurl.com/yesk37l

Great looking Marquee,the old lamps. This from BOXOFFICE March 1985, The Clermont-deluxe and Southview drive-in will be run by Consolidated Theatres for the 1985 season.the Clermont is adding a second screen holding 660-400 cars,Southview will become a three screen Drive-in.

This one is a vacant lot now.

Only the frame of the marquee, a light pole, and the pole supporting the “Welcome” sign remain.