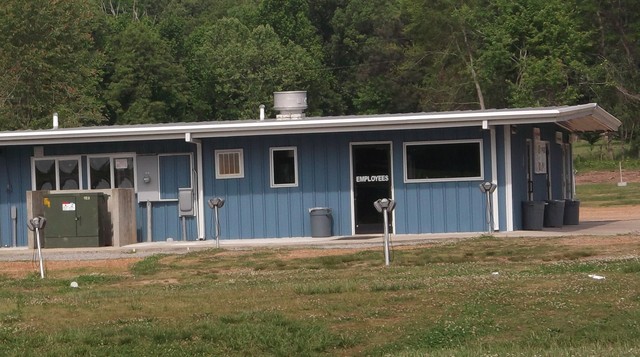 The Calvert Drive-In opened on July 3, 1955, featuring the western “The Pathfinder” with George Montgomery, Jay Silverheels and Helena Carter. The second feature was the 1952 adventure “The King of the Congo” starring Buster Crabb and Gloria Dea. The price for admission was only thirty-five cents and the Calvert Drive-In operated with only seven employees. Paul & Evelyn Harrington purchased the ten acre plot of land from Dora Draffen just outside of Calvert City on Highway 95 in 1953, with the dream of opening a drive-in theatre.

Paul Harrington Sr. began in the theatre business as a popcorn popper when he was eleven years old and he eventually worked his way to projectionist which was a very technical job in those days. From there he graduated to building and designing drive-in theatres for the Ruffin Amusement Company. He bought the Calvert Theatre in 1949, which was an indoor theatre on Main Street in Calvert City. Within the first year, business was steady but began to take off especially after the Calvert Drive-In became the first drive-in in the area to show a Technicolor picture. The movie was “Miss Sadie Thompson” starring Rita Hayworth. This film was considered controversial be many due to its suggestive nature. To see what all the fuss was about, cars packed the Calvert Drive-In to see the popular movie in April 1954.

In the early years, movie studios would often send out movie stars to many of the drive-ins as an attraction during the opening night of a film in order to boost attendance. One of the biggest stars to visit the Calvert Drive-In was Al ‘Fuzzy’ St. John, a famous comical side-kick in many movies throughout the golden era of motion pictures. Country music star Cowboy Copas also visited the drive-in and sang a few songs on the roof of the drive-in building. Over the years, several generations of the Harrington family have worked at the drive-in in one capacity or another. Drive-in owner Evelyn Harrington, who just turned 100 years in 2013, sold tickets at the gate until she was 86. Mrs Harrington is also responsible for introducing the famous Calvert Drive-In cheeseburgers. She began cooking the burger in the 1960’s, and every year long lines form for one of these mouth-watering cheeseburgers.

The Calvert Drive-In is the only one of its kind in western Kentucky, and people travel for miles around to enjoy a show in the open air.

This theater was built by Paul Harrington Sr., who also designed it. It is still operated by the Harrington family.

Interesting. It appears that this drive-in is just north of the I-24/KY 95 intersection, but also that there is no access from I-24. From the overhead it appears that you could watch part of the movie while driving east unless the trees are in the way.