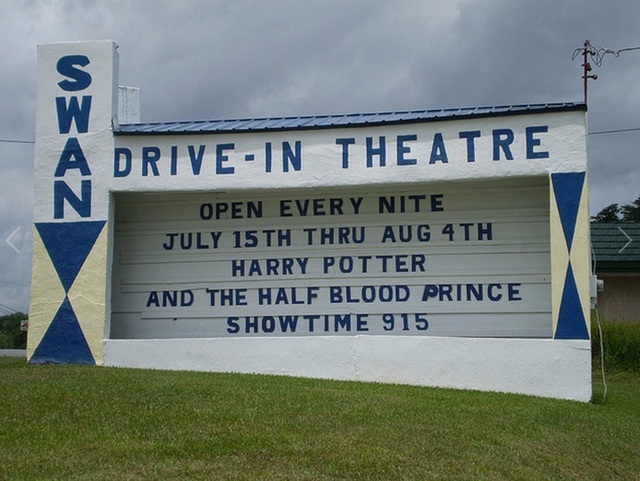 The Swan Drive-In opened in June 1955 with a capacity for 275 cars. Later increased to 500 cars. This drive-in remains open today.

Yes, I have been there a few time. He’s got a GREAT business. He triples my numbers at my twin in the same area.

A history of the Swan Drive-In (PDF here) says that it was built in 1955 by Jack Jones, Sr. and W. H. Tilley, Jr., operators of the Rialto Theatre. Tilley sold his interest in both theaters to Jones in 1959. The PDF has a monthly calendar for each theater from November, 1959.

The Swan just had its screen renovated last winter (2013), and it was converted to digital projection around that same time (due to the company that made the reels changing their format as well). They use FM for sound, and they run movies year round.

Joe Vogel, I hope you saved a copy of that history, or is it the same as the one at the Swan’s web site: http://www.swan-drive-in.com/history.php

The Swan wasn’t listed in my 1955 Theatre Catalog, nor in my 1959 and 1963 IMPA. It’s there in my 1969 IMPA and beyond. I’m not doubting the history; I just wonder how many of these hidden drive-ins were left out of the “official” peak drive-in numbers.

NeonMichael: If I saved a copy it is trapped on my old computer’s hard drive, but I believe the history you linked to is the same one. The Swan probably wouldn’t have shown up in the catalog until 1956, as it was built after the 1955 edition went to press.

However, it might not be in the 1956 catalog either, as about that time the catalog became less comprehensive, dropping its list of independent houses and listing only those that were part of chains. I don’t remember exactly which year they did that, but it was in the 1950s. If the “official” lists of that era were derived from the catalog, then a lot of independent theaters are probably missing.

The drive-in is seen at the begining of the movie “Need for speed(called Kisco Drive-in”) in the movie.

renovated the screen was demolished and replaced with a new one!

Boxoffice, June 25, 1955: “The new 275-car Swan Drive-In at Blue Ridge, Ga., is scheduled to open next weekend and is owned by W. H. Tilley and Jack Jones, who also operate the Rialto in Blue Ridge … It is a very neat and attractive drive-in with graveled ramps … the drive-in has a curved 40x72-foot screen. It has a nice attraction board at the highway, since the drive-in sits back from the highway a short distance on a side road on a very attractive site atop a knoll.”