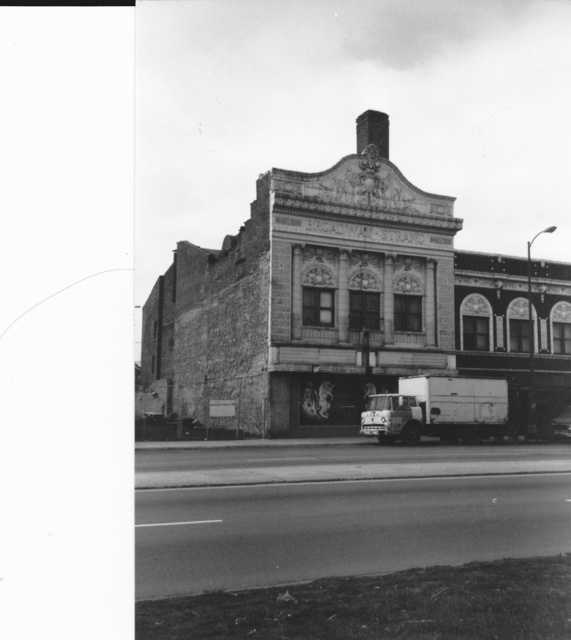 The Broadway Strand Theatre opened on November 10, 1917 on Roosevelt Road (then still called 12th Street) at Ashland Avenue on the Near West Side (close to what is today the University of Illinois at Chicago Medical Center). In its prime, this theatre had a 2/8 Kimball theater organ.

The Broadway Strand Theatre was demolished in 1998 after a long period of disuse.

Here is a profile from the Illinois Historic Preservation Agency’s HAARGIS system. It includes a small picture.

I photographed this place in the early 90’s. At the time there was retail in the lobby, although no current tenant. Building appeared to be in good shape. It’s a shame they couldn’t have at least saved the shell.

I wonder why the IHPA site identifies the architect as JH Gernfeld. It looks like an unusual place.

It appears that the architect information was conflated with the entry for the Marshfield across the street; this was the theater actually designed by Gernfeld.

Thanks for posting those. I remember driving by this theatre not long before it was demolished. Thinking then of course how great it would be if it were refurbished.

The Broadway-Strand Theatre address was listed in Moving Picture World as 6141-53 W. Twelfth street, and opened November 10, 1917 by Marshfield Amusement Company officials Louis L. Marks, Julius Goodman, Meyer S. Marks and Louis H. Harrison. It seated 2,100 people without a balcony, employed a fifteen-piece orchestra, and the architect was A. L. Levy. There was a playroom for children and a gymnasium for the employees. Marshfield Amusement Company also then operated the Orpheus, Illington and Marshfield theatres.

The web page Broan linked to in the first comment on this theater is gone from the Internet, and now the only web pages anywhere that mention an architect named J. H. Gernfeld are those at Cinema Treasures. As LouRugani noted, The Moving Picture World (December 1, 1917) attributed the design of the Broadway Strand Theatre to architect A. L. Levy. As Broan’s first comment on the Marshfield Theatre page notes, Levy designed that house too.

There is a surname Gernfeld, but as far as I can discover there was never an architect of that rare name in Chicago or anywhere else. Maybe J. H. Gernfeld was someone from Levy’s office (a clerk or draftsman perhaps) whose name was on a document where it shouldn’t have been, and somebody from the Historic Preservation Office got confused by it. Alexander L. Levy should be listed as architect of the Broadway Strand Theatre.

Joe, The HARGIS system was redesigned and the report from my first comment is now Here. I don’t know if that’s a permanent link, so to find it in the future, the HARGIS system is at http://gis.hpa.state.il.us/hargis/ and you’d search for Broadway-Strand. Page 2 of the report still lists J.H. Gernfeld as architect. However, as you note, other, more primary, sources list Levy. But contrary to your suggestion, J.H. Gernfeld was an actual theater architect in Chicago, responsible for at least a renovation of the Marlowe per p136 of Konrad Schiecke’s Historic Movie Theaters in Illinois. So it’s possible that Levy was the original architect and Gernfeld did a renovation.