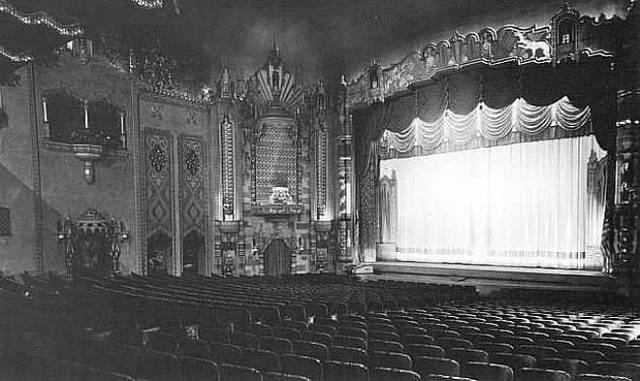 It was demolished in August 2001, after sitting empty, except for vandals. The site remains an empty plot.

My grandfather, Harry Headland, was chief projectionist when the Oriental opened on Labor Day weekend, 1931. First feature-film to be shown was a romantic comedy: Merely Mary Ann, starring Janet Gaynor & Charles Farrell.
Owners ran a contest for naming the theater, and the winning entry was submitted by a girl from Bridgewater.

I am very glad to have found this website. I gathered some information and I am hoping to connect with my cousin that posted here . My great grand uncle was Michael. My mother was very close to him until he died. He always wore a big cowboy hat. I remember visiting his apartment and he had basically recreated his office there. I am hoping that I will connect with my cousin to see what happen to much of the stuff because I believe it should be preserved. Thanks again

By Jeffrey Snedden For The Times

Not a month goes by that I don’t receive inquiries about the old Oriental Theater in Rochester. So many people have fond memories of attending shows at the palatial theater. I recently received a fine photocopy of the dedication program, which was handed out at the grand opening on Sept. 4, 1931.

The Oriental Theater was a product of Majestic Amusement Co. and its owners, Emil Winograd, Meyer Winograd and Samuel Oklin. The theater had a seating capacity of 1,500, making it the largest in the county. It was equipped with a Western Electric sound system, at the time the best quality available.

The opening night program included a live dedication of the new theater by Rochester officials. It was followed by several acts, which were chosen to highlight the theater’s ability to handle motion pictures and live stage performances.

The premiere of “Merely Mary Anne” starring Charles Farrell and Janet Gaynor led the festivities. This 74-minute film was followed by a live performance by “Al Steel’s Broadway Revue,” which featured live singing, dancing and comedy. The final performance was by renowned Stanley Theatre organist Freddie Rose, who wowed the sellout crowd on the house organ. Intermission entertainment was performed by comedian Andy Clyde and vaudeville actors Burns and Allan.

The Oriental Theater served the public for 41 years before the final movies were shown on April 23, 1972. On that date, moviegoers came to see a twin bill feature of “Cisco Pike” starring Kris Kristofferson and “See No Evil” starring Mia Farrow. Located at 121 Hinds St., the theater was gutted of its extravagant features at public auction in April 1974. Between 1977 and 1980, the first floor housed the Infinity Dance Club.

The Oriental was finally torn down in August 2001 after vagrants had wrecked any remaining historical value.

Jeffrey Snedden is a local writer, researcher and historian. If you have any questions, comments or suggestions for future Histories & Mysteries columns, contact Snedden at . Each week, he will choose a few new topics and update past ones with readers' notes and questions.

John: A very nice post about a theatre that should still be with the residents of Rochester. Thanks for the memories.

I spent many Saturday afternoons with my friends at the Oriental. It’s a part of my life I’ll never forget. I did go to movies with my parents the Family Theater across the street, but despite the good times, the experience just wasn’t the same as at the Oriental. Even before the movies started, I got a lot of enjoyment out of just sitting there and looking at the decor.

In the late Seventies, my cousin’s family bought it and transformed it into Infinity. I did attend when I could (and the band I was in in 1981 performed there once when the regular band had to cancel), but it still lacked the je ne sais quoi of my early youth.

I still live here in Rochester (I was born here, and I’ll probably always be here), and walking around town is enjoyable, but I always feel a bit of sadness when I walk by the Oriental’s former site (and other long-gone places). But I still have my memories.

Hello to all of you Rochester people…and those who remember the Oriental. Please look up the current Robbins Theatre renovation taking place in Warren, Ohio. It is a combination stage theatre and movie venue, as our Oriental had been.

My name is Mike Carver….and I was the last to attempt to save the Oriental in 2001. I and other interested parties had a plan to acquire and renovate the Oriental…..a group of individual artists from Rochester, Mike Nelson of the Rochester Theatre Group, and an architect consultant from the area who had been involved in historical renovations in the t. Louis downtown area.

We(the group and I) had actual architectural renderings and plans, including the actual drawings of which all the plaster of paris decor in the theatre had been made…….all this and a firm business plan……we presented at a Rochester Council Meeting in the Library. We were well on the way to a viable way to keep the Oriental alive. At that meeting, most of the council members and the Mayor listened as the designer made a presentation. Amazing enough, the most boisterous concern was that, assuming we were successful, we might create a PARKING problem in Rochester. Imagine…the concern that Rochester streets might once again be “crowded”….I guess they could not conceive of creating a parking authority…or some other way to actually make money.

Our plan was to have a perimeter of shops/offices on the upper balcony areas…..to help fund the operation. Mike Nelson had made contact with the Pgh. Dance Theatre group….who had discussed making it their “home venue”..if it was up to their standards. OUR plan was to have a variety of often ethnic based “nights” to draw people from our multi ethnicity Valley.

The Borough Manager, Ed Pirolli, myself, and a the leader of the downtown Rochester group, met and I was told by Ed…..(just wait until the Borough finally gets posession)…..which they did in August 2011.

On the same day we all were excited that Ross Gudiati from KDKA was to visit the site…..The Borough conveintly made crash arrangements to have Unis Demolition quickly show up and tear off the front of the structure……very simple…Ed lied to us and had NO INTENTION of allowing this wonderful structure to be saved. Statements had bee made about the soundness of the structure….yea right….the side walls had to be pulled down with bulldozers…..the wrecking ball wouldn’t touch them…….you….the public were lied to…again. And as you go by….where is the “upscale restaurant” we kept hearing about. AND…the property has considereble hazardous material issues buried beneath the dirt on Hinds Street….good luck to the sometime/maybe developer.

I moved on to another venture, which has been good to me……but I will always remember what we had in store for the Oriental……and what it would have been for Rochesters future.

Look at the Robbins(Warren, Ohio) renovation as it progresses…..see what your short minded politicians have cost Rochester.

Interesting to read about the Robins Theatre in Warren Ohio and their Robins Project.

Sorry…..I incorrectly typed “August 2011” in my remarks……should have been August 2001….sorry Mike Carver