Operated by: Your Neighborhood Theatres 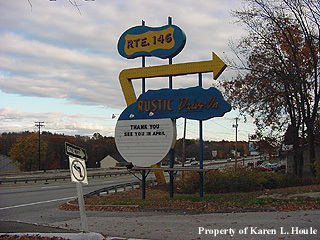 The Westacres Auto Theatre was opened in 1942. In 1951 it was renamed Rustic Drive-In with a single screen with a capacity for 600 cars. In 1988, two more screens were added and the name was changed to the Rustic Tri-View Drive-In. It has a capacity for 550 cars.

It is listed as the last open drive-in in Rhode Island and is open seasonally April through September.

Theres a house thats practically under one of the screens on the street level. I wish i lived in that house. You can tune into the movie on the stereo and watch the movie in the backyard, lol

Just went to Rustic 1st time Saturday night. Got there ½ hour before showtime so parking spot was not great but better than some. Saw T3 UGH! and Captain America Bad ending. Did not think snack bar had big selection. Place is cash only. Dissapointed in intermission. No dancing hot dogs or pushing of snack bar. Only coming attraction of Mission Impossible & Spider Man. Easy to exit. My visit to Mendon Drive In last lear was a better expoerence.

Drive In will be digital cinema starting Friday June 14.

In 1991, I caught a double bill of FX2 and whatever STAR TREK film was released around that time. It was the first and only time I’ve been there.

There’s a nice article about the Desmaris family and the Rustic in the Sept. 8, 1997 New York Times, still available online 20 years later. A real time capsule! It says Clem and Beverly met while working there in 1954. They bought the Rustic in 1988, threw out the X-rated movies and added two screens.

The 1952-53 Motion Picture Almanac lists the owner as Rustic Drive-In, Inc. and that capacity at 600. That stayed the same through at least its 1966 edition. In 1982, the owner was Hallmark (not the card company, I hope!) and capacity was 500, and nothing changed through the MPAs' last drive-in list in 1988.

2008: a staycation postcard from The Herald News 2013: 10-minute Executive Suite TV interview, with drive-in footage, of the folks who run the Rustic 2017: Very nice drone video including what the front looks like at ground level

My first time here was with friends on June 26, 1961 to see a double bill of “The Apartment” and Elmer Gantry.“ Pretty good program.

1942 ads for a Westacres Auto Theatre on Louisquisset Pike, one mile from Park Square, suggest that was an earlier name for the Rustic Drive-In.