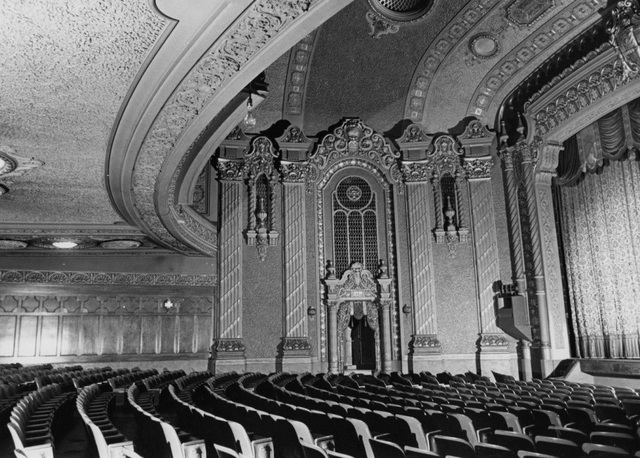 The Michigan Theatre opened on July 1, 1930 with 1,739 seats, it was the last and largest of several movie palaces built in Jackson.

The Michigan Theatre featured both stage shows and motion pictures, and was an entertainment mecca for Jacksonians for decades before ultimately closing its doors in 1978.

Its original-and-only-owners kept the Michigan in excellent condition during their tenure, and its original appearance has changed little since it opened, amazingly, other than an Art Moderne new marquee added about 1940, and its interior being painted over in a uniformly dark color scheme in the 1960’s.

Since restoration began in 1993, over a million dollars has been put into returning the Michigan to its original glory, including restoring the original colors to the auditorium and lobby, regilding, and adding a new marquee which is more in line with the Michigan’s original 1930 marquee.

Full restoration was virtually completed in 2009. The Michigan Theatre screens classic and art films, including children’s matinees, and its stage is host to concerts and local theater productions.

I agree with Patsy, it would be nice to see some interior photographs of the auditorium and lobby. It is wonderful to know that the Michigan theatre is being restored with such devotion.

ERD: Thanks for agreeing with me and hopefully in the near future we’ll see some interior photos. I know that CT member, Lost Memory has posted numerous theatre photos and maybe LM will be able to discover some photos!

Lost Memory: Once again, thank you for the Michigan Theater photos. This theatre is absolutely beautiful and I regret not seeing this theatre, in person, when I was a student at Adrian College in nearby Adrian, MI.

Well, I’m honored that you posted them “just for me”. Thank you kind friend and if I ever get back to the State of MI I will most definitely check out this hometown ‘cinema treasure’!

Once again, this theatre is a wonderful example of a small town theatre that has been saved, preserved and cherished as this cinema is truly a ‘treasure’. I hope the citizens of Jackson MI realize this fact!

Lost: Another great photo of a great theatre in Michigan!

View link
This link will take you to photos of the Michigan Theatre.

The photos look great! Very ornate auditorium which looks like it’s been restored to the original color scheme

My Grandfather, Wirt S. McLaren opened the Michigan Theatre on April 30, 1930, where he was the manager for several years. I have the original newspaper clippings from that day. He also owned the Capitol Theatre in Jackson, MI as well as many other theatres in and around the Jackson area.